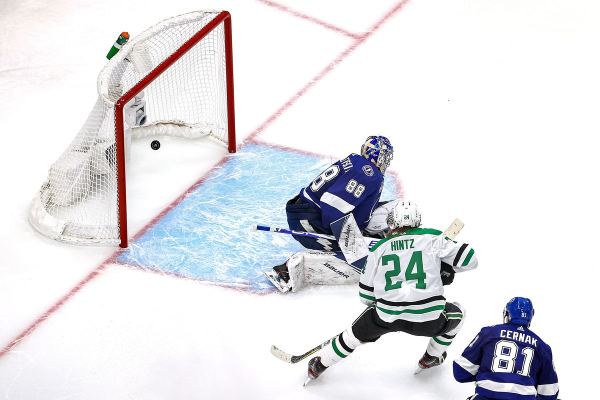 The Stanley Cup is in full swing after the Tampa Bay Lightning have tied up the series 1-1 against the Dallas Stars. Both these teams are playing really competitive hockey and are both very evenly matched. It’s almost a toss up who will win Game 3 on the Stanley Cup finals. DraftKings is giving the Lightning a slight edge over the Stars. But despite being the underdog the Stars won Game 1: 4-1, and lost Game 2: 2-3. So far, Dallas has been able to cover the puck spread over both games. The Lightning might have the edge in the sportsbook, but they’re getting edged out by the Stars on the ice.

The Dallas Stars’ offense are playing a little reserved and are focused on efficiency. In Game 1, they only attempted 20 shots on goal to the Lightning’s 36, and scored 4 goals. In Game 2, it was more even with the Stars having 29 shots to the Lightning’s 31. The Stars made too many mental mistakes in Game 2, giving up two goals on power plays in the first period. The Lightning then scored a third goal later that period. It was a deep hole for the Stars to climb out of. Look for Joe Pavelski, Center, as the leading goal-scorer through the playoffs with 10 goals and 5 assists, to continue driving the Stars offense. Pavelski was blanked in Game 1 where the Stars scored several goals with very little effort. The Stars have been able to spread the puck using a wide variety of skaters on the ice. Mattias Janmark, Joel Hanley, and Jason Dickinson all have scored their first playoff goals this season during the Stanley Cup series.

Defensively, the Lightning seemed a little mismatched. Goalie Andrei Vasilevskiy allowed four goals, in Game 1, to the Stars on just 20 shots. Either is was a bad night for the Lightning all around, or the Stars were especially lucky. He was much improved in Game 2 allowing only two goals on twenty-nine shots. Perhaps the Stars were making hasty shots, but Vasilevskiy seems much more comfortable when he has the lead. Top Lightning defender Victor Hedman has yet to make an impact this Stanley Cup, this could change in Game 3.

The Stars project themselves as a solid defensive team that will create opportunities for the offense to score. The Stars leading scorers this playoffs have been defensive players Miro Heiskanen, with 5 goals and 18 assists, and John Klingberg, with 3 goals and 16 assists. Goalie Anton Khudobin is one of the league’s best goalies and he’s really making it tough for the Lightning offense.

The Lightning are favored in this game solely because they have a more aggressive, high powered offense. However, the Stars defense is rock-solid and teams struggle to score points, especially with Khudobin in the net. The Stars need to stay out of the penalty box in order for their defense to work. The Lightning might win Game 3 but they might not cover the spread. It’s the tale of great offense versus great defense, prepare for a battle until the final whistle.