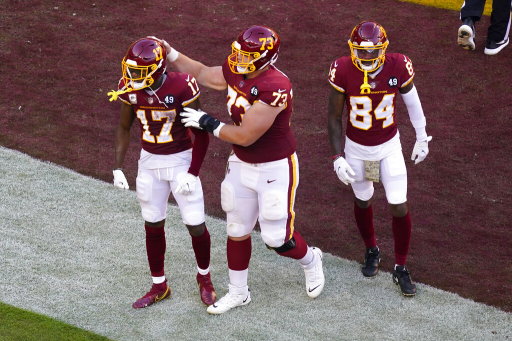 This Sunday, the Washington Football Team will be going head to head with the Detroit Lions at the Ford Field, Detroit, USA. The Week 10 NFL match will kick off by 1:00 PM on the 15th of November. This game will be broadcasted live on the FOX TV Channel.

The Detroit Lions to Bounce Back?

The Detroit Lions will be coming into the matchup after suffering yet another defeat at the hands of the Minnesota Vikings in week 9. The final score read 34-20, and the loss has brought the team’s record even lower to a 3-5. In the game, quarterback Matthew Stafford struggled and only threw for 211 yards with 2 touchdowns and 2 interceptions. Running back D’Andre Swift rushed for 64 yards with 13 attempts, while wide receiver Danny Amendola secured 7 passes for 77 yards.

The Detroit Lions offense gained 421 yards of offense against the Minnesota Vikings, and on defense, the Lions allowed a total of 487 yards and 3 touchdowns.

In offense, the Detroit Lions rank 19th in offense in the NFL, having an average of 24.6 points per game. Quarterback, M. Stafford, has been quite impressive this year, passing for a total of 2,127 yards, and scoring 14 touchdowns with 7 interceptions. Running back, D’Andre Smith has rushed for a total of 250 yards with 54 carries scoring 4 touchdowns. Wide receiver Danny Amendola has 25 receptions for 401 yards with no touchdowns this season. The team has a total average of 339.0 yards per game ranking 20th in the league.

The Detroit defense is ranked 28th in the NFL, allowing a total of 30.0 points per game, and an average of 392.0 yards per game.

The Detroit Lions will be giving it their all to emerge victorious in this match, however, the team has some key players unavailable due to injuries and health complications, including M. Stafford, D. Roberts, T. Flowers, T. McRae, J. Dahl, J. Davis, K. Golladay, J. Agnew, N. Bawden, T. Walker, J. Okwara, and H. Bryant.

Despite the uncertainty of these players playing on Sunday, we believe the Detroit Lions will give it their all to move up on the league table.

Another Loss For the Washington Football Team?

The Washington Football Team also lost their last game against the New York Giants by a tiny margin. The final score read 23-20, dropping the team’s overall record to 2-6. Quarterback, Alex Smith, passed 325 yards with 3 interceptions scoring 1 touchdown. Meanwhile, running back, Antonio Gibson, rushed for 20 yards with 6 carries scoring 1 touchdown. While, Terry McLaurin secured 7 receptions for 115 yards, and scored 1 touchdown. The team gained a total of 402 yards of offense in the game.

The Washington Football Team defense gave up a total of 350 yards of offense to the New York Giants.

The Washington Football Team has an average of 19.1 points per game in offense ranking 29th in the NFL. The team has attained an average of 306.4 total yards per game, 214.1 in passing yards, and 92.3 in rushing yards. The Washington team quarterback has thrown for a total of 362 yards, scoring 1 touchdown. Running back Antonio Gibson has a record of 90 carries for 391 yards and 5 touchdowns this season.

The Washington Football Team will be looking to bounce back from their recent defeat, although the odds are against them. They have a number of star players whose availability for Sunday’s game is in doubt, including QB A. Smith, D. Inman, M. Loannids, M. Liedtke, R. Foster, G. Christian Sr., B. Love, K. Allen, S. Charles, and A. Gandy-Golden.

With these players possibly absent from Sunday’s game, it is unclear what to expect from this team.