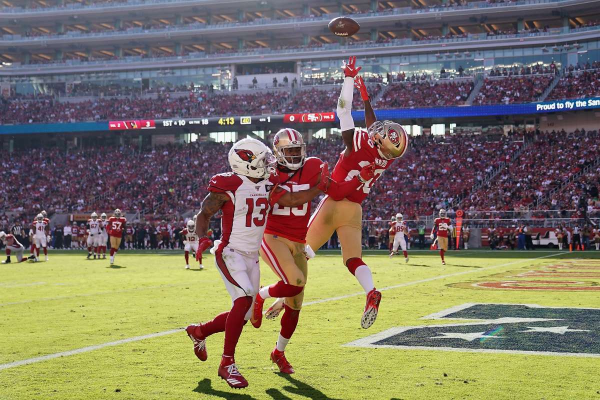 The Washington Football Team and San Francisco 49ers share the same record, 5-7, but seem to be trending in opposite directions as football teams. Washington has won 3 games in a row, most recently bringing an end to the Pittsburgh Steelers’ bid at a perfect season. The 49ers, on the other hand, are losers of 4 of their last 5, most recently allowing Josh Allen to shred them to the tune of 375 yards and 4 touchdowns in their Monday Night loss to the Buffalo Bills. Both teams are clinging to life for a playoff spot with 4 weeks left.

A Home away from Home

The San Francisco 49ers will be wearing their home scarlet jerseys, but they won’t be playing in Levi Stadium. The 49ers were essentially evicted from their home stadium in Santa Clara, California due to recent Covid-19 restrictions in the county, and have set up shop in Glendale, Arizona. For now, the 49ers will play their home games at State Farm Stadium, the typical home field of the Arizona Cardinals. Coach Kyle Shanahan and the team are preparing to be in Arizona through at least their Christmas weekend game against the Cardinals.

The 1972 Miami Dolphins will remain the only team to finish an entire season with a perfect record, this time thanks to the Washington Football Team. Washington traveled to Pittsburgh and took down the 11-0 Steelers, ending their bid at perfection. The Football Team scored 13 unanswered in the 4th quarter, and Montez Sweat tipped a Ben Roethlisberger pass at the line, which Jon Bostic picked off, helping seal the deal.

San Francisco will be down starting Right Guard Tom Compton on Sunday, while starting defensive tackle D.J. Jones and cornerback Emmanuel Moseley are listed as Doubtful. Washington will be without dynamic rookie running back Antonio Gibson after suffering a turf toe injury in last week’s game.

The Washington Football Team will travel to Arizona looking to keep their bid for the NFC East title alive. Incredibly, they find themselves tied for first in the NFL’s worst division, although the New York Giants own the tie-breaker, having beaten Washington twice.

San Francisco has been thrust into a difficult situation, having to stay in a hotel, and play away from home. They still have playoff hope, but just barely, and sit at the bottom of the NFC West. If they can win their next two games, starting with Washington, they may get Jimmy Garappolo and Greg Kittle back for the final two games of the season.

However, the Football Team has been playing better football as of late, winners of 3 straight, and 4 of their last 6. Washington is 5-2 ATS in their last 7. The under has also hit in 5 of the last 6 meetings between these two teams.

I think Washington continues their hot play, and the defense is able to get after Nick Mullens and the 49er offense. Alex Smith will have to elevate his play against his former team, particularly with Antonio Gibson missing. I expect him to do just enough to pull off another upset. I like Washington, in a sloppy, defensive football game. Washington 20, San Francisco 17