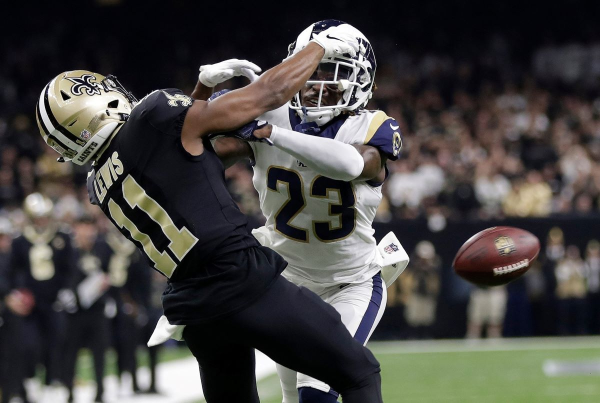 After a missed pass interference call kept the New Orleans Saints from reaching the Super Bowl two seasons ago, the NFL reacted by implementing replay for such infractions the following season. In a recent interview, NFL executive vice president Troy Vincent admitted the league “failed miserably” regarding pass interference reviews.

“We saw, a year ago, when (the pass interference rule) played out, starting with myself, what we put in place last year … Those outcomes were not good for professional football,” Vincent said.

Vincent did so alongside a message that the NFL should think twice before rushing rule changes in future seasons.

“Because we didn’t do the proper due diligence, it played out publicly,” Vincent said. “The last thing people should be talking about is the way the game is officiated. (Officials) should be faceless objects, managing and facilitating game flow.”

The rule, which was passed on an experimental basis, only resulted in 13 of 81 challenged PI calls being overturned. Last month, the NFL competition committee did not endorse the renewal of the rule.

Vincent’s harsh comments on the league’s handling of pass interference reviews came during a discussion about the NFL’s proposal for a “sky judge,” which would add a booth umpire to each officiating crew.

Owners are expected to vote on the proposal via video conference during a May 28 meeting.

The sky judge could be the lasting result of the Saints-Rams non-pass interference call. Although reviewing PI calls has proven unfruitful, the idea of an additional official who could add input from off the field was borne out of the PI experiment.

The sky judge rule was proposed by the Ravens and Chargers, both of which also proposed the addition of a senior technology advisor to the referee. So, even if a sky judge isn’t added as an eighth member of each officiating crew, it’s likely that officials will gain reinforcements in some capacity.

Since a rule change prohibited kicking teams from utilizing a running start prior to the 2018 season, the importance of the onside kick has all but disappeared from the game. Over the last two seasons, roughly 11% of onside kicks have been successful.

Now, the NFL is considering a change to the rule.

A proposal from the Eagles would give trailing teams the chance to keep possession after a score by attempting a 4th-and-15 play from their own 25-yard line. A team could only opt for the post-score play twice in a game.

The rule to implement a 4th-down play instead of an onside kick is expected to be voted on at Thursday’s virtual owners’ meeting.

To finish with the worst record, the Jaguars are the odds-on favorite with odds of +250. However, the Redskins (+600), Panthers (+700), and Bengals (+700) are all frontrunners to earn the worst record of the season.