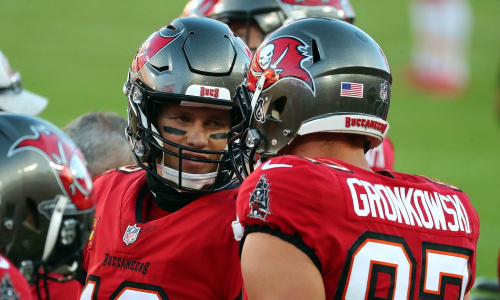 One team is hot, and the other is not heading into Sunday’s game between the Minnesota Vikings and the Tampa Bay Buccaneers.

After tumbling to five losses in their first six games, the Vikings (6-6) have turned it around and now have won five of their last six. If the playoffs began this week, Minnesota would sneak in as the No. 7 seed.

Tampa Bay (7-5) would be the No. 6 seed but has a much different feeling about how things are going currently. The Buccaneers were sitting pretty at 6-2 following a Monday night win over the New York Giants, but a 38-3 loss to NFC South foe New Orleans the following week started a 1-3 run that has them virtually out of the running to beat out the Saints for the division title.

The Buccaneers are listed as -6.5 point favorites at FanDuel’s sportsbook. Their money line is -300. The Vikings are +250 on the money line, and the game total is 52.5. Both teams are 6-6 ATS this season.

With Tom Brady, all things are possible, but the Buccaneers have lacked consistency over the last month.

They were great in a 46-23 win over the Panthers on No. 15 but lost as 4-point favorites against the Rams the following week. Tampa Bay was just good enough to cover by the hook in a 27-24 loss to the Chiefs last week.

It’s difficult to back a team that makes it difficult for you to predict what kind of performance you are going to get.

Although the Vikings have been winning lately, they are on an 0-3 ATS streak following last week’s 27-24 overtime win over Jacksonville.

Keep an eye on the injury report for two big names for Tampa Bay. Wide receivers Chris Godwin and Mike Evans are not shoe-ins to play on Sunday. Godwin missed Wednesday’s practice with a finger injury, and Evans was limited with a hamstring injury.

The Vikings have an extensive injury report that includes several offensive linemen and their top two tight ends. They have had several key injuries during their last six games but at some point, those injuries may catch up to them.

This is a tough game to handicap because of Tampa Bay’s lack of consistency.

Perhaps the best thing the Buccaneers have going for them is that they were idle last week. Extra time to prepare is especially good for a veteran like Tom Brady. It’s a safe bet that the Tampa Bay offense will have a good game.

But what about the defense? The Buccaneers give up an average of 23.3 points per game for the season, but that average is 28.8 points in their last four games.

The Vikings’ offense has been clicking thanks to the emergence of rookie wide receiver Justin Jefferson. He combines with veteran Adam Thielen to give the team two great receiving options in addition to dominant running back Dalvin Cook.

Minnesota may have an average ATS record overall, but most of those ATS losses have come when it was the favored team. The Vikings are 4-1 ATS as underdogs. That 80% mark is the best in the league among teams that have been an underdog more than two times.

The Buccaneers, meanwhile, are 4-5 ATS as a favorite, and we’re still not sure what we’re going to get out of them.

We recommend a play on the Vikings +6.5.