Vikings Head into MNF as Road Favorites vs Bears 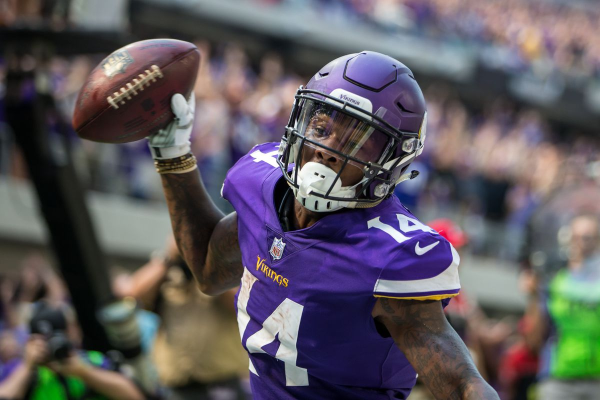 This week’s edition of Monday Night Football features a divisional matchup between the Minnesota Vikings and the Chicago Bears. The game is scheduled to take place at Soldier Field in Chicago, on Monday, November 16, at 8:15 PM ET. This fixture will be covered on ESPN and stream live on fuboTV.

The Vikings Strive Off The Back of Dalvin Cook

The Minnesota Vikings are coming into this matchup riding on a two-game win streak, all thanks to the amazing play of the running back Dalvin Cook.

The stars of the Minnesota Vikings got dim after starting the season with a 0-3 record. Their stars shine bright again, having won three of their last five games, with Dalvin Cook rushing for 499 yards on 79 carries, finding the end zone seven times, and securing a receiving score. His success has also seen that the pressure placed on QB Kirk Cousins, who has never won the Bears after three attempts since he joined the team, has been elevated.

The Minnesota Vikings hope that the amazing form of Cook continues as he has only rushed for a total of 86 yards against the Bears, all three times he has encountered them.

However, there are key injuries within the camp of the Minnesota Vikings, including G Pat Elfein (probable), DB George Iloka (out), CB Holton Hill (out), LB Anthony Barr (out), DT Micheal Pierce (out), TE Irv Smith (out), DE Danielle Hunter (out), and Cameron Dantzler (questionable).

Will the Chicago Bears be able to Clip the Wings of Dalvin Cook?

The Chicago Bears started the season with a 5-2 record, though there were mostly close wins against below-average teams, like the Detroit Lions, New York Giants, and Falcons were all wins by four points differential, and a one-point win against the Tampa Bay Buccaneers, and a touchdown win over the Carolina Panthers without running back Christain McCaffrey.

The Chicago Bears had a running with three teams destined for the playoffs and lost by a combined score of 74-50, having allowed at least 24 points per game. With a struggling offense, the Bears quarterback play has been quite terrible despite replacing Mitch Trubisky early this season. Nick Foles has been poor.

While the Chicago Bears defense is as good as expected, the offense is in terrible form. The Bears are the fourth lowest-scoring offense in the league. Against the Tennesee Titans, it took until the fourth quarter before the Bars could get on the score sheet. With such a poor scoring form, it is expected that the high scoring Minnesota Vikings will come out on top by the end of the game.