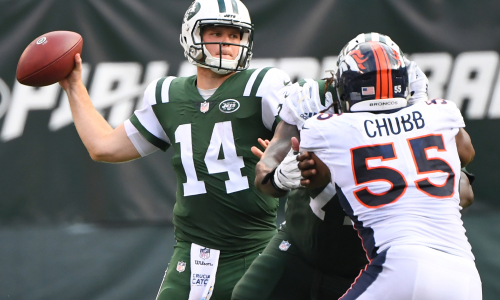 The New York Jets and Denver Broncos will face off against each other in this week’s edition of Thursday Night Football. Both teams will be seeking their first victory of the 2020 NFL season. The Broncos are coming off a tough loss to Tom Brady and the Tampa Bay Buccaneers. On the other hand, the Jets, who have lost their first three games by a big margin are looking to finally get into the win column. Last game, New York lost 36-7 to the Indianapolis Colts. Despite the tough seasons so far from both clubs, they look to bounce back on Thursday. Kickoff is set for 8:20 p.m. ET at Metlife Stadium.

Denver: The Broncos are 2-6 against the spread in their last eight games as favorites.

NYJ: The Jets are 2-7 against the spread in their last nine games against teams with losing records.

Why the Broncos can cover the spread

After Drew Lock went down with a shoulder injury, coach Vic Fangio decided to go with the third-string quarterback on Thursday night, Brett Rypien. Rypien replaced backup Jeff Driskel in the fourth quarter on Sunday and was able to complete his first eight attempts against Tampa Bay. Although he threw an interception at the goal line, Rypien showed promise and this is why he was named the starter for Thursday.

Driskel has been performing subpar this season for Denver. He has completed 17 of his 30 passing attempts. In those attempts, he has been sacked five times, including one safety. Giving Rypien a shot versus the Jets seems like the right choice for the Broncos. In Denver’s last 20 games, they have been through five different quarterbacks.

Despite these quarterback issues for Denver, a good performance from Rypien against a weak New York defense will put the Broncos in a good position to cover the spread.

Why the Jets can cover the spread

Despite all the struggles the Jets have had this year, they showed some promise in the first half versus the Colts on Sunday. Sam Darnold and the New York offense accounted for 188 yards in the first half. If they are able to keep that up for the whole game, this will put them in a good position to cover.

Darnold will have very little room to make mistakes against the Broncos. Last week he had three interceptions, two of those being returned for a touchdown. In his first three games, Darnold has completed just 61.5 percent of his attempts. Wide receiver Braxton Berrios leads the Jets with 10 receptions this year. Berrios has proved to be Darnold’s preferred weapon after losing Robby Anderson this past offseason. It would take a fully complete game out of the Jets offense in order to give themselves a chance to win the game and cover the spread. It will be interesting to see how they will bounce back after a tough second half last Sunday.

Why you should take the over

New York comes into Thursday night’s game averaging 31.3 points allowed. Despite Denver being ranked 30th in the league in points-per-game with 15, they have the potential to put up big points against the Jets weaker defense. Another thing to add is Denver is allowing just over 23 points-per-game this year. Although being ranked 12th in the league in that category, the over/under being 39.5 should encourage betters to take the over on Thursday. There is potential for a very high scoring game.

One of Mike McClure’s (DFS pro) top picks for Thursday Night’s matchup is Sam Darnold. We all know that Darnold has been off to a rough start this season. The former No. 3 overall pick in the 2018 NFL draft has thrown for 562 yards this year including three touchdowns and four interceptions. However, McClure is confident Darnold can post better numbers against the Broncos defense.

One major disappointment for Denver’s defense this year is being without All-Pro pass rusher Von Miller. Miller injured his ankle just before the season started which will cause him to miss the entire 2020-2021 season. The Broncos rank 29th in the league in passing touchdowns allowed. Every quarterback Denver has faced this year has passed for multiple touchdowns. Tom Brady torched the Denver defense with three passing touchdowns last week.

Another player McClure is high on for Thursday nights matchup is Denver tight-end Noah Fant. Through the first three weeks of the season, Fant has posted 14 receptions for 184 yards including two touchdowns. Although Fant was unable to score last week, he still recorded 10 targets.

The New York defense has been weak when it comes down to containing tight-ends so far throughout the season. The Jets defense has given up three touchdowns this year to tight ends in the last two weeks. This is why Fant is one of McClure’s optimal picks for Thursday nights game.