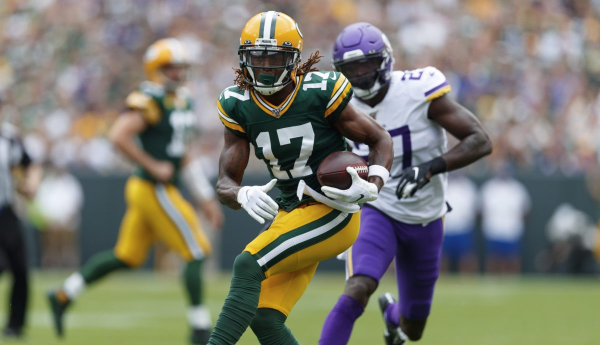 Thursday Night Football features two teams with postseason aspirations when the Philadelphia Eagles travel to Lambeau Field to take on the Green Bay Packers. Despite a slow start, the Eagles are trying to rekindle some playoff magic after being beaten by the New Orleans Saints in the divisional round last year. After missing the playoffs last season, the Packers appear to be on a mission to start out this season.

Coming into Week 4, the Eagles are 1-2. They won their opening matchup 32-27 over the Washington Redskins; however, they have dropped two in a row, losing to the Atlanta Falcons 24-20 and the Detroit Lions 27-24. Behind Carson Wentz, the Eagles are hoping to get back on the winning side in Week 4.

The Packers are riding a strong start by Aaron Rodgers and an even stronger start by Green Bay’s defense. In their first three games combined, they have only given up 35 points total. They haven’t been wins over horrific teams either, with victories over the Bears, Vikings and Broncos. They hope to keep rolling at home Thursday.

The point spread for this one currently sits with the Green Bay Packers being four-point favorites playing at home. The over/under on total points scored is set at 46.5.

On the offensive side, it is the Philadelphia Eagles who hold the advantage three weeks in. They currently rank 10th in the NFL, averaging 25.3 points (20 points on the road). The Packers rank 23rd, averaging 19.3 points (although they average 24 at home).

Philadelphia Hoping To Get Back To .500

It has not been the start to the season that the Eagles wanted, but they have the offense to jump back into contention. Led by Wentz, they are hoping the strong-armed quarterback can lead them to a win over Green Bay. On the season, Wentz is 72 for 118 (61 percent) for 803 yards, six touchdowns and two interceptions.

Through three games, Wentz has also been sacked seven times. His leading receivers to this point have been Nelson Agholor and Zach Ertz. Agholor has gone for 18 catches, 168 yards and three touchdowns, while Ertz has 17 catches for 190 yards.

On the ground, it is Miles Sanders and Jordan Howard leading the way. Sanders has 34 rushes for 106 yards while Howard has gone for 99 yards on 25 rushes and a touchdown.

Defensively, they have struggled a bit more. Zach Brown leads the team with 17 tackles, while the team has just two sacks through three games (Andrew Sendejo and Timmy Jernigan have one each).

For the Packers, Aaron Rodgers leads the team under center, although he hasn’t exactly been stellar thus far. He is 57 for 93 (61 percent) for 647 yards, four touchdowns and no interceptions. He has been sacked seven times.

In the air, Davante Adams leads the way with 15 catches and 198 yards. Marquez Valdes-Scantling comes in second with 13 receptions for 170 yards and a touchdown.

On the ground, Aaron Jones has led the way. He has 46 rushes for 174 yards and three touchdowns. He also has six receptions for 38 yards.

Defensively, Blake Martinez leads the way for the Packers with 32 tackles total. Preston Smith (4.5) and Za’Darius Smith (3) lead the way in sacks, and four players have one interception each. Despite quite a bit of turnover on the defensive side this offseason, they seem to be running on all cylinders early this season.

While the Packers have not lit it up on the offensive side at this point, the defense has been solid. With Rodgers under center, it has to be expected that the offense will bounce back, and if the defense can hold strong, this could be a very scary team to play. To start the season, the Packers are 3-0 against the spread, and with DeSean Jackson and Alshon Jeffrey still questionable, that very well could move to 4-0. Especially playing at home on a short week, I like the Packers despite giving up the four points.