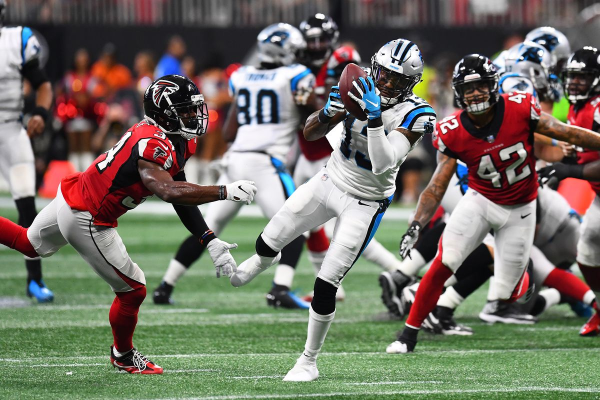 Both of these teams are coming off losses that could have been wins last week. When that is the case, a short week is either the best or worst thing for a team.

For Atlanta they lost late, again, vs. Detroit. It was yet  ,another fail as a favourite and a sign that the change in coaching is hardly a fix. The loss went pretty much according to the usual formula. Atlanta had success throwing the ball of course, but there wasn’t much balance, and when they really needed a defensive stop they couldn’t get one. That has been the story all season.

Carolina has been streaky this season, losing their first two games, then winning three in a row and then losing their next two. That puts them at 3-4 SU, with a great chance to even things up this week against Atlanta. Last week they played a close game against New Orleans, covering in the loss. Each week we are watching the injury report to see when RB Christian McCaffery will be back on the field. He can take their offense to another level.

This one opened at Carolina -3 and was quickly bet down to the current number. It is clear that Atlanta still has a lot of respect in the market. I assume that is because they do have one very reliable part of their game, and that is their passing attack led by Matt Ryan. That is going to be hard for Carolina to stop and keeping up will be a challenge if McCaffery is still sidelined.

However, it should be noted that these teams met just a few weeks ago in Atlanta, with Carolina coming away with a 7 point victory. In that one, Atlanta was at home and favoured by 2.5 points. Matt Ryan had his worst game of the season to date with a rating of just 63, so even though the Panthers pass defense is not elite they might have something in this matchup.

Conversely, Carolina QB Teddy Bridgewater had a very strong game, even with the team on the road and no McCaffery. RB Mike Davis gave them good balance and even though he is not as explosive as CMC, he gives them a physical presence in the running game. I know they have lost the last two games, but I am still confident they can have close to a repeat performance against a sagging Atlanta team.

Atlanta has a terrible record but I still think they are at least a tier above teams like the Jets and Jacksonville. True power ratings have these teams relatively close, which is why the spreads have been not much more than home advantage. Given that, I see some value in Atlanta as an underdog. A Carolina team with a rookie coach and missing its best offensive player is definitely no sure thing. Even against a struggling team like the Falcons.

In the first meeting of the season between these two teams the total was 53.5 and it fell well under with a 23-16 final. As a result, it is no surprise this total is lower than that one. Atlanta is 4-3 O/U on the season while the Panthers are 3-4. Carolina played to four straight unders before last week’s game against New Orleans. It was the first time they had an over and covered this season, and I don’t think that is an accident.

The reality is that Carolina is competing hard this season, but they are limited. Their best approach is to play with the lead so they can run the ball the way they want to. The last time these teams played the Panthers were able to build a 20-7 lead by halftime and after, that they could play patiently the rest of the way. Correlated with the spread result, they will look to deploy the same formula they did in the earlier win. I am not seeing how Atlanta’s coaching change makes much difference and the Falcons have already gotten their bump from it.