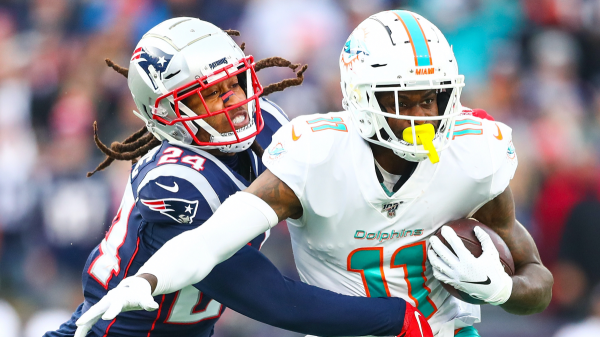 In a Week 15 showdown, the Miami Dolphins host the New England Patriots in a rematch from Week One. The season opener resulted in a 21-11 Patriots win, but things have changed quite drastically since then. The Dolphins are 7-2 in their last nine games, while the Patriots are 4-5 in their last nine. Miami is currently -1.5, with the Over Under sitting at 41.5.

Odds for Patriots vs Dolphins

The Dolphins are coming off a 33-27 loss to the Superbowl favorite Kansas City Chiefs. Their underrated defense managed to pick off Patrick Mahomes three times, more than he’d been intercepted all season entering the game. Ultimately, the Fins offense was unable to keep up with the Chiefs always an explosive offense. That’s not a worry for this match-up, as the Patriots’ offense has been non-existent more often than not this season.

In the two games prior, Miami’s defense held bad offenses in the Bengals and Jets to a combined 10 points. That’s this teams route to victories, letting the defense do their thing while taking care of the ball on offense. Tua Tagovailoa has done exactly that, having nine touchdowns against just one interception on the season. He has an incredible interception rate of just 0.5 %.

The rookie signal-caller is playing excellent in his role as a game manager. He isn’t winning them games outright, but he is in the sense that he’s allowing the defense to win them games. There’s no reason to think his style of play will change in this one.

The Dolphins could be without wide receivers DeVante Parker and Jakeem Grant. Already ruled out is tight end Mike Gesicki.

The Patriots have been one of the most ineffective offenses over the course of the entire season. Cam Newton’s numbers sum up how little they’ve been able to do offensively, he has thrown for five touchdowns against ten interceptions. His bad numbers are a result of his play, his lines play, and a lack of weapons.

Things don’t look great entering a match up with the Dolphins, who have intercepted the second most passes in the NFL. That’s been a big part of their league leading 25 turnovers forced. The Pats are coming off a disastrous performance last week, losing 24-3 to the Los Angeles Rams. From start to finish, their offense was non-existent.

They may be getting veteran wide receiver Julian Edelman back for this one, as he’s being listed as Probable.

Confidence in a Dolphins Victory

History might tell us to not trust the Dolphins against the Patriots, but times have changed. These aren’t the Patriots of yesterday, mainly due to a certain Tom Brady leaving the franchise prior to this season. At this time, the Dolphins are simply the better team than the Patriots.

-1.5 is too low for this game but does give us the comfort of taking the money line with little added cost, as it currently sits at -118. That’s where the best bet is, as the Dolphins’ offense is no threat to break a game open. The little price to pay is certainly worth it, and that’s why I’ll be taking the Fins money line with full confidence.

If Miami is missing both their wide-outs, I like rookie Lynn Bowden Jr. to have a big day. Last week he finally got involved, but only after Parker and Grant left the game with injuries. If both are out, consider props on the youngster to have an impressive day.

Currently, he’s +1600 to score the first touchdown of the game. While I don’t hate that line, there’s potential value to like more. To score two touchdowns he is +3700, which makes for a fun prop bet with a big payout. It’s certainly possible for the explosive rookie to break a couple of big ones, especially if he is featured offensively.