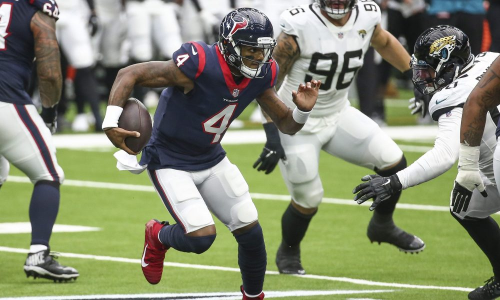 The Jacksonville Jaguars take a six-game losing streak into a face-off against the Houston Texans on Sunday, November 8, 2020, at TIAA Bank Field, Jacksonville, Florida. The first half of the NFL season could not have gone any worse for the Texans. They lost six games out of seven and have won only one home game. The team, however, has not been riddled with injuries like a few teams have this season, and the Texan fans are hoping this does not strike them in the second half of the season. Regardless, the 2020 campaign was a tough first seven weeks, and the Texans will embark on the second half of the season, traveling to face the Jacksonville Jaguars.

The Houston Texans are the favorite to win this matchup with a money line odd of -320. The big inactive for this game seems to be Jaguars quarterback Gardner Minshew, who is currently sidelined with a thumb injury. This means that the Jacksonville core is shifting to Jake Luton, the rookie. The good news for Jacksonville fans is that there was additional training time for him. The bad news is that Minshew was the star player and the only good thing the team had going. It would be difficult to have faith in the offense’s ability to pull this one off without him.

Meanwhile, the Texans are led by Deshaun Watson, who is a great player. Watson has thrown for 1,002 yards, nine touchdowns, and two interceptions in the three games since Bill O’Brien was fired. The team has put up an average of 28.7 points. The Texans should have no trouble moving the ball and putting up points, with Jacksonville giving up 31.4 points per game. All they have to do would be to strengthen the defense, which will help the team’s general outlook since Minshew will not be playing.

The Jaguars Hope to Break Duck

The Jaguars have reached a 22 average point per game, nine less than the Texans have given up per outing at 31 average points.

After extending their hot and San Diego’s cold streak, the Seattle Mariners will be looking to leave Petco Park with a two-game sweep as they take on the Padres this afternoon. Yesterday, the Mariners pounded out a dozen hits and plated eight runs, and Chris Flexen pitched 6.2 shutout innings to collect his third straight END_OF_DOCUMENT_TOKEN_TO_BE_REPLACED