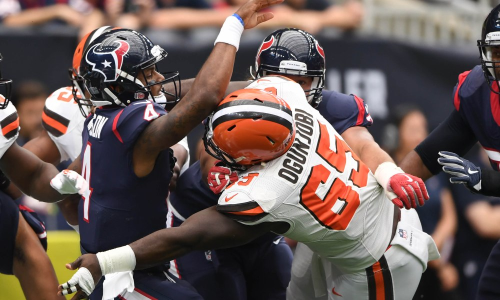 The Cleveland Browns hope last week’s bye will reinvigorate their sputtering offense when they host the Houston Texans at 1 p.m. ET Sunday. The Browns (5-3) have stumbled following a four-game winning streak with losses in two of three matchups before the bye, scoring just 50 points total in the three games after averaging 37.5 points during the win streak. The good news for the Texans (2-6) is they beat Jacksonville 27-25 last week; the bad news is they are 2-0 against the Jaguars this season and 0-6 against everybody else.

The bye came at a good time for Cleveland, which saw quarterback Baker Mayfield placed on the reserve/COVID list but activated without missing a game. Running back Nick Chubb, who rushed for more than 100 yards twice in four games before spraining the MCL in his right knee, practiced this week and could return Sunday. Running back Kareem Hunt, who gained 107 yards on 29 carries in his lone career appearance against Houston in 2017, has averaged 16.3 rushes per game in Chubb’s absence.

Houston may be shorthanded in its backfield as running back David Johnson – who leads the Texans with 408 yards and three touchdowns – likely is out after suffering a concussion last week. Running back Duke Johnson rushed for 41 yards and a touchdown against Jacksonville and caught four passes after replacing David Johnson. Quarterback Deshaun Watson saw his streak of four-consecutive 300-plus yard passing games snapped, but finished with 281 yards in the air and a season-best 50 yards rushing.

The Browns come in as a 3.5 point home favorite according to FanDuel, with a -178 moneyline compared to the Texans +150 moneyline. The over/under for total points is 47.5.

Watson’s current completion percentage (68.3 percent) matches his career best and his 2,376 yards through eight games is on pace to set a career high. Receiver Will Fuller enters the weekend with a touchdown reception in a franchise-record six straight games, while receiver Brandon Cooks has 27 receptions and three scores across his past four games.

Defensive end J.J. Watt became the fifth-fastest player in NFL history to reach 100 sacks last week, registering his team-high fourth of the season in the fourth quarter. Inside linebacker Zach Cunningham is tied with outside linebacker Whitney Mercilus for second on the team with three sacks, and leads the Texans with 78 tackles.

Getting Chubb back in the lineup will be a boost for a Cleveland rushing attack averaging five yards per carry and 150 yards per game. Mayfield passed for 297 yards and five touchdowns in a 37-34 victory over Cincinnati on Oct. 25, but completed just 12-of-25 passes for 122 yards as the Browns were held to six points in a Nov. 1 loss to Las Vegas.

Defensive end Myles Garrett is a handful for any offensive line, starting the weekend tied for second in the NFL with nine sacks. Defensive end Olivier Vernon registered his first two sacks of the season against the Raiders, and inside linebacker B.J. Goodson has seven or more tackles in six of his eight games.

Perfect Opportunity for Browns to Cover as the Over Prevails

The Browns have shown they can score even with Mayfield’s inconsistencies, and the Texans represent the perfect opponent for Cleveland’s offense coming off the bye. The same came be said for Cleveland’s defense, which allowed 209 yards rushing to Las Vegas before the bye but now faces the NFL’s worst rushing offense. Watson will make plays, but nowhere near enough to offset the Browns offense having its way. Take the Browns to cover with ease and take the over in this one.

After extending their hot and San Diego’s cold streak, the Seattle Mariners will be looking to leave Petco Park with a two-game sweep as they take on the Padres this afternoon. Yesterday, the Mariners pounded out a dozen hits and plated eight runs, and Chris Flexen pitched 6.2 shutout innings to collect his third straight END_OF_DOCUMENT_TOKEN_TO_BE_REPLACED