Texans Trip Up Titans In Round 1 For AFC South Title 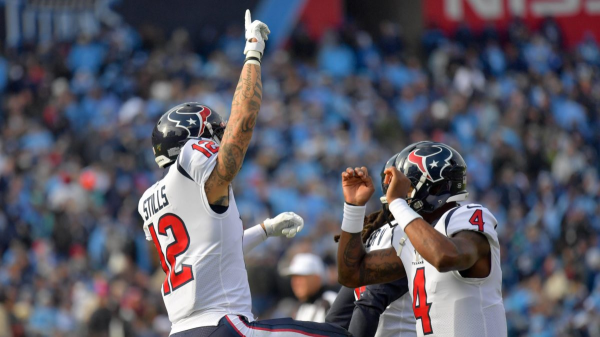 The AFC South has been tightly contested all year long, and Sunday’s matchup between the division’s two leading contenders perfectly exemplified just how little separates the Houston Texans and Tennessee Titans.

Coming into Week 15, Houston and Tennessee were set for a run of two games in three weeks to decide who would earn the division crown and a trip to the playoffs. In a wild game that included red-zone turnovers and a 24-point fourth quarter, the Texans edged out the Titans by a score of 24-21 in the first leg of their season series.

Houston jumped out to a 14-0 first-half lead on the back of two touchdown throws from Deshaun Watson to Kenny Stills, but Tennessee rallied back with 14 straight points to tie the game in the fourth quarter.

Watson then led the Texans on 75- and 80-yard drives to set up a Carlos Hyde touchdown and the eventual game-winning field goal by Ka’imi Fairbairn. DeAndre Hopkins played a major part in both drives.

The Titans would respond with a Ryan Tannehill touchdown pass to Dion Lewis, but it was too little too late for the home team.

Hyde and Hopkins were the difference makers for Houston. While Hyde rushed for 104 yards and a vital touchdown, Hopkins caught six balls for 119 yards and was virtually unstoppable on what turned out to be Houston’s game-winning drive.

With just two weeks remaining in the regular season, the Texans now have a clean shot to the playoffs. However, the Titans aren’t done yet.

Let’s first take a look at Houston, which has the more straightforward path to the AFC South title and postseason football.

After taking down Tennessee on the road and improving to 4-1 in the division and 9-5 overall, the Texans only need a win over the Titans in the final game of the regular season to claim the AFC South crown.

However, they also have a chance to win the division as early as next week. In the weekend separating the Texans-Titans rematch, Houston will go on the road to take on the Tampa Bay Buccaneers. Meanwhile, Tennessee will host the New Orleans Saints.

If the Texans win, they win the AFC South because even if they lose to Tennessee in Week 17, squaring the overall records and head-to-head matchups, the Texans hold the advantage with their record against all AFC South opponents, which is the next tiebreaker.

In that case, the Texans would wrap up the division title a week early, and Tennessee would be left going after a Wild Card berth.

For now, Tennessee coach Mike Vrabel will be telling his team that two straight wins is their best chance for playoff football. But when it comes to winning the AFC South, Vrabel’s squad will need some help.

To make the playoffs, the Titans will need to outperform the Steelers down the stretch. Both teams currently own records of 8-6. If Tennessee loses next week, it could still earn the final Wild Card spot by holding the better strength of victory tiebreaker, but that would require a Pittsburgh loss in one of its final two games.

While the AFC South may still come down to a winner-take-all Week 17 matchup between the Texans and Titans, Houston made its own path to the postseason much easier by earning the win over its division rival in Week 15.

Because they’ve now taken control of the division and own a better record than both Tennessee and Pittsburgh, the Texans, who enter this week’s game against Tampa Bay as a two-point favorite, have become a heavy favorite to earn a playoff berth.

In fact, Houston is now a big favorite to win the AFC South, with odds of -650 compared to the +450 odds of Tennessee.

However, Tennessee can still find solace in the fact that it is now more likely than Pittsburgh to reach the postseason. While the Titans currently hold odds of -132 to earn a playoff berth, the Steelers are sitting on odds of +114.

The Texans are the leaders in the clubhouse, but the Titans hope to still have their say.