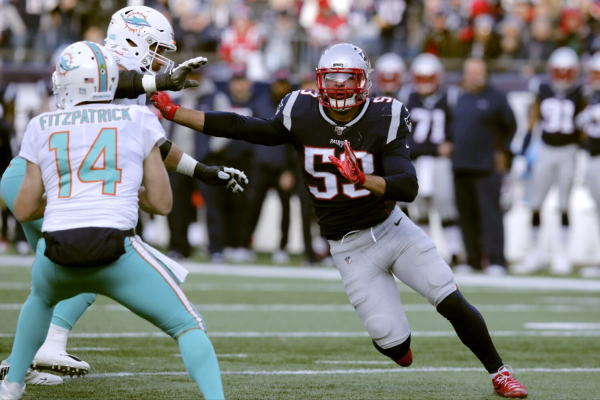 The red-hot Tennessee Titans head to Foxborough on Saturday night to square off against the New England Patriots. Normally, a Patriots Wild Card weekend game is an easy pick because it doesn’t exist. This is typically a bye week for the Patriots, as they are normally a 1 or 2 seed, but not this season.

The Titans have been on fire since swapping out starting quarterbacks in Week 7, and they look to advance to the divisional round for the first time since 2017, when they beat Kansas City in the Wild Card round.

Tennessee has won five of its last seven games, including a 35-32 victory over the Chiefs. Ryan Tannehill has moved the passing game forward, near the level of the Titans’ elite rushing game.

The Patriots are reeling and have lost three of their last five, including a Week 17 home meeting with the Dolphins. The Patriots fell in a game that they were dominated on both sides of the ball statistically.

New England is favored by five points, with the over/under set at 44.5.

New Blood At The Helm

A switch seemed to have flipped when this Tennessee team inserted Ryan Tannehill as its starting quarterback. Tannehill found a favorite target in wideout A.J. Brown and statistically dominated the quarterback position over the last couple of months.

The NFL’s offensive player of the month for December finished the regular season with a 7-3 record in his starts, completing over 70 percent of his passes and throwing 22 touchdowns to only six interceptions.

The Titans led the NFL in red-zone scoring percentage this season, converting 75.56 percent of their trips into touchdowns. That’s eight percent more often than even Baltimore converted from inside the 20.

The emergence of Brown has helped the Titans into the end zone from outside the red zone. Brown ranks second in the NFL in yards per reception, averaging 20.2 yards per catch.

Derrick Henry ranks fourth amongst running backs in yards per rush, averaging 5.1. This offense can move the ball and get it into the end zone.

The Patriots defense has stolen some of Tom Brady and the offense’s spotlight this season and is much of the reason that New England is in the playoffs. Offensively, the Patriots weren’t much to look at this year.

That being said, playoff Brady is a completely different animal than the version we’ve seen in the regular season. And with there being a chance that this is his last start in front of his home fans, expect Brady to come out with some fire.

On the other side of the ball, fully expect Jamie Collins and the defense to bring the pressure all day. The Patriots know that Tannehill makes mistakes in the pocket while under immense pressure; after all, they played him twice a season during his tenure with Miami.

Tennessee will have to find ways to stop not only Collins but Kyle Van Noy and Dont’a Hightower as well. The trio combined for 19 sacks and 37 hits on the quarterback this season.

To me, on paper, this is the most interesting game of the Wild Card weekend. The Titans are rolling, while the Patriots are reeling. Nonetheless, the game is being played in Foxborough, and we’ve all seen this coach/quarterback combo dominate in the playoffs at home.

Tennessee and New England are both 8-7-1 against the spread this season. The Pats are 3-4-1 at Foxborough against the spread, while the Titans are 5-3 on the road. It’s worth noting that road underdogs are 8-0 during Wild Card weekend the last two seasons, as that trend looks to continue in this game.

Tennessee keeps it close enough to cover and possibly pull out the win. Pick the Titans +5.