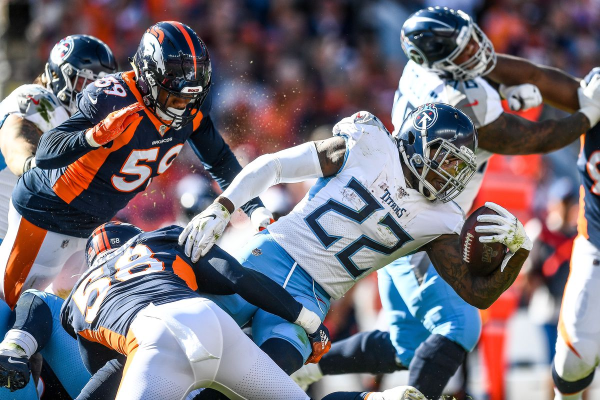 Monday Night Football will feature an exciting matchup of AFC South versus West as the Tennessee Titans travel to Empower Field at Mild High to take on the Denver Broncos. Kickoff for this one is scheduled for 10:10 pm ET.

Both of these teams finished second in their respective divisions last season, with the Titans finishing 9-7 overall. Powered by a strong running game thanks to Derrick Henry, the Titans could be a tough team to stop this season, especially after they had success during the postseason last year before getting knocked out by the eventual champion Kansas City Chiefs.

For the Broncos, they will once again look to rely on a tough defense to keep them in games. They are also hoping for a big step up from Drew Lock, who will be in his second year as the starting quarterback. Last season they finished 7-9 overall and will have a challenging task to dethrone the Chiefs as the best team in the division.

According to Fanduel, the Titans come into this one as the favorites. Their moneyline currently sits at -158 while the Broncos come in at +134. The spread features the Broncos at +3 while the over/under for total points sits at 40.5.

On the defensive side, it was the Broncos who held the advantage. They ranked 8th overall in points allowed per game at 19.8. The Titans came in 11th, allowing an average of 20.6 points per game.

Titans Look To Run All Over Broncos

When it comes to big, punishing running backs, there is not a better one in the NFL than Derrick Henry. The running back rushed 303 times for 1,540 yards and 16 touchdowns last season. He also had 18 receptions for 206 yards and another two scores. After signing a big extension over the offseason, he will be looking to lead the Titans to a postseason run once again.

Under center for the Titans will by Ryan Tannehill. After head coach Mike Vrabel benched Marcus Mariota in favor of Tannehill last season, the veteran quarterback did not disappoint. In 12 games (10 starts), Tannehill threw for 2,742 yards, 22 touchdowns, and six interceptions. Along with Henry, he will look to help lead the Titans on offense this season.

After finishing under .500 last season, the Broncos will be looking for more consistency this season, especially from quarterback Drew Lock. Last season, Lock played in 5 games and went 100 for 156 (64.1 completion percentage) for 1,020 yards, seven touchdowns, and three interceptions. He also rushed 18 times for 72 yards. Lock will need to step it up for the Broncos’ offense to catch up with their defense.

Taking The Titans To Win And Cover

Both of these teams are solid on the defensive side, so it wouldn’t shock me to see a relatively low-scoring game. With that being said, the Titans have a significantly better offense, and I expect them to ultimately pull away in this game. For my money, I am taking the Titans at -3 in this one.