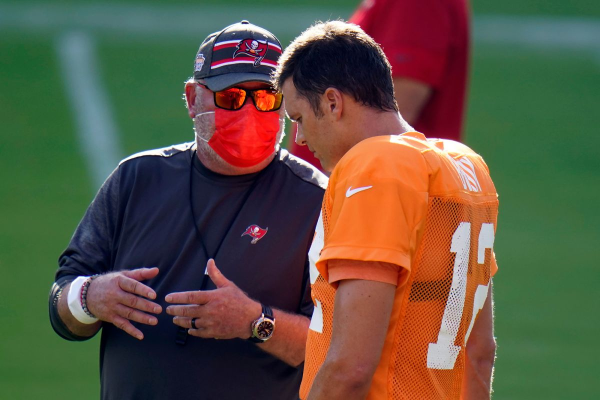 Thursday Night Football features a matchup of 3-1 teams as the Tampa Bay Buccaneers are in the Windy City to take on the Chicago Bears. Kickoff for this one is scheduled at 8:20 P.M Eastern from Soldier Field.

The Buccaneers come into this one after beating the Los Angeles Chargers 38-31 in Week 4. Tom Brady threw for 369 yards and five touchdowns in that game, while Ronald Jones II rushed 20 times for 111 yards. Thus far, their only loss of the year is a 34-23 loss to the New Orleans Saints in Week 1.

For the Bears, their first loss was this past Sunday, as they fell to the Indianapolis Colts 19-11. Before that, the three games that they have won were each by just four points. Needless to say, while they have picked up wins, Chicago has struggled to put away opponents.

According to Fanduel, the Tampa Bay Buccaneers are the favorites despite playing on the road. Their moneyline sits at -190 while the Bears are +162 to win. The spread comes in +3.5 for the Bears, and the over/under on total points is 44.5.

Defensively, these two are neck-and-neck. The Bears currently rank seventh in points allowed per game at 20.2. The Buccaneers are right behind them in eighth, allowing an average of 23 points per game.

After a disappointing Week 1 against the Saints, Brady and the Buccaneers are seemingly improving each week. They hope to make it four in a row on Thursday night.

One concern for Brady, though, is that he may be without some of his best weapons. O.J. Howard is out for the season, and Chris Godwin has also been ruled out for Thursday night’s game. Mike Evans (17 receptions, 230 yards, five touchdowns) and Leonard Fournette (24 rushes, 123 yards, two touchdowns) are questionable heading into Thursday night.

After Nick Foles replaced Mitch Trubisky and led the Bears to a comeback victory over the Atlanta Falcons, hopes were high that he would be able to make the Bears at least around a league-average offense. In his first official start, he instead led the team to just 11 points. Now, Foles is hoping to bounce back and help solidify a position that the Bears have struggled with for years.

Foles will have the Bears’ full complement of receivers available to him, led by Allen Robinson. On the season, Robinson has 25 catches for 331 yards and two touchdowns. Jimmy Graham has also performed well this year, with 14 catches for 136 yards and three scores.

On the ground, David Montgomery leads the Bears’ rushing attack. He has rushed 53 times for 218 yards (4.1 average) but doesn’t have a touchdown on the ground yet. He has also added nine catches for 94 yards and a score.

For full disclosure, I want to see if Mike Evans plays or not in this one. If he does, it is hard to bet against coach Bruce Arians and quarterback Tom Brady. While the Bears defense is stout, their offense has been atrocious, and the Buccaneers’ defense is underrated.

Especially after the struggles the Bears’ offense showed last week, the Buccaneers at -3.5 seems like the way to go in this matchup.