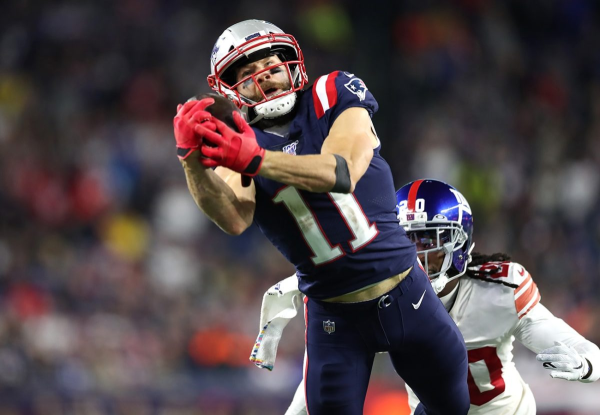 Sunday Night Football this week features a matchup of first-place teams as the AFC East-leading New England Patriots (8-0) travel to M&T Bank Stadium to take on the AFC North-leading Baltimore Ravens (5-2). Each of these teams are on opposite sides of their bye weeks as the Patriots will enjoy the bye week next week while the Ravens have had an extra week to prepare for his matchup. With that in mind, it will be interesting to see whether quarterback Lamar Jackson and the Ravens can figure out a stout Patriots’ defense. Kickoff for this one is scheduled for 8:20 pm ET.

The Patriots are enjoying an unbeaten season thus far but will have a tough matchup on the road this week against the Ravens. Last week, the Patriots were able to take advantage of their defense creating turnovers as they beat the Cleveland Browns 27-13. The week prior to that, they blanked the New York Jets 33-0. Tom Brady and Bill Belichick might not have the dynamic offense of previous years, but they can still put up points. Combined with their defense, it is no wonder they are undefeated.

The Ravens are hoping that their bye week came at the right time to give them extra time to prepare for the Patriots. In their last matchup, on Oct. 20, they beat the Seattle Seahawks 30-16 on the road. While their defense isn’t as powerful as it used to be, the Ravens can still get the job done, as they were able to get a couple of scores against the Seahawks on turnovers (one interception and one fumble returned). They will hope to slow down Brady and try to find a way to pick apart a tough Patriots’ defense.

The New England Patriots come into this as three-point favorites despite playing on the road. The over/under for points scored is set at 44.5.

On the offensive side, these are the top two scoring teams in the league. The Patriots currently rank atop the list, as they are averaging 31.2 points per game (31.2 on the road). The Ravens come in right behind, averaging 30.6 points per game (23.7 at home).

On the defensive side, it is once again the Patriots who sit atop the rankings. They are allowing an astonishingly-low 7.6 points per game to opponents (4.2 on the road). The Ravens come in 16th overall, allowing 22.3 points per game (24.7 at home).

The New England Patriots continue to show, year in and year out, that they can find ways under Belichick to sit at or near the top of the league in terms of performance. It also helps when you have Brady under center, regardless of whether he is getting up there in age or not. This year, Brady is 200 for 309 for 2,251 yards, 13 touchdowns and four interceptions. He has also been sacked 13 times.

The receiver position has been somewhat volatile for the Patriots, given that they have had, and released, both Antonio Brown and Josh Gordon. One constant, though, has been the play of Julian Edelman. He is once again the leading receiver for Brady, having brought in 53 catches for 574 yards and four touchdowns. Having also brought in Mohamed Sanu in a trade-deadline acquisition, Brady is hoping those two and running back James White can continue to keep defenses honest.

In the run game, Sony Michel leads the way for the Patriots. He has rushed 140 times for 464 yards and six touchdowns. White has only rushed 23 times for 66 yards but has caught 42 passes for 358 yards.

With wins over the Miami Dolphins, Arizona Cardinals, Pittsburgh Steelers and Cincinnati Bengals, the Ravens haven’t exactly had the hardest schedule in the league. Their most recent win over the Seahawks was nice, but a win over the Patriots would truly be a signature win.

The Ravens will look to Jackson to try to pick up the win. On the season, Jackson has gone 136 for 215 for 1,650 yards, 11 touchdowns and five interceptions. He has also been sacked 17 times. While his stats through the air aren’t particularly explosive, he has been solid on the ground, rushing 83 times for a team-high 576 yards and three touchdowns.

Mark Ingram has also had success on the ground, rushing 99 times for 470 yards and seven touchdowns. Take into account that the Patriots showed some vulnerability last week defending against the run, and this might be the recipe for success for the Ravens.

It is always hard for me to bet against Belichick and Brady, particularly when the spread comes in so small. I do think that the Ravens might be able to give the Patriots some fits with their run game, but I also think that the Patriots will be prepared for that type of game plan from Baltimore.

If they can force the Ravens to beat them through the air, I don’t know if Jackson can get it done. Throw on top of that the fact that Brady and the offense should be able to find success against the Ravens, and I think that New England can keep their winning streak intact. For my money, I am taking the Patriots at -3 in this one.