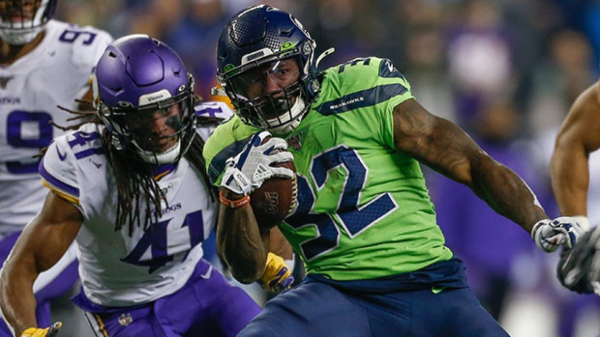 Sunday Night Football features an NFC West showdown when the Seattle Seahawks (10-2) travel to Los Angeles Memorial Coliseum to take on the Los Angeles Rams (7-5). Currently, the Seahawks are tied for the top spot in the division with the San Francisco 49ers. Knowing that they have another showdown with the 49ers in the last week of the season, the Seahawks want to ensure that they get every win they can going into that matchup.

The division rival Rams, who played in the Super Bowl last year, have struggled this season but still have hopes of possibly getting a Wild Card spot with a strong finish. Kickoff for this one is scheduled for 8:20 pm ET.

The Seahawks have been rolling of late, winning five in a row since a loss to the Baltimore Ravens. In that time, they have beat the Falcons (27-20), Buccaneers (40-34), 49ers (27-24), Eagles (17-9), and Vikings (37-30). As reflected in those scores, the Seahawks can beat you on both sides of the ball, although the vaunted defense of years past is no longer around.

For the Rams, it has been quite the inconsistent season. The offense as a whole has not played to the level it did last year, and the defense has been inconsistent as well. They have gone 2-2 in their last four games, with wins over the Bears and Cardinals, but losses by the Steelers and Ravens. The game against Baltimore, in particular, was an ugly one as the Ravens beat them 45-6. Still, they have hope of a late push, but time is running out if they are going to get a playoff spot.

Despite the inconsistencies of the Rams, the Seahawks come into this one as only one-point favorites on the road. It some places, you can even find this as a straight-up pick ’em type game. The over/under for total points scored currently sits at 47.5.

Russell Wilson has always been an above-average quarterback, but this year, he is putting up MVP-type numbers. He certainly has competition, but he has been stellar thus far. On the season, Wilson is 258 for 383 for 3,177 yards, 26 touchdowns and just four interceptions. He has taken 35 sacks, but part of that is due to his scrambling nature. Wilson has rushed 57 times for 284 yards and three touchdowns.

The leader in rushing for Seattle has been Chris Carson. The lead running back can punish opposing defenses and has rushed 231 times for 981 yards and five scores.

Through the air, the leaders for Seattle include Tyler Lockett (63 catches, 831 yards, six touchdowns) and D.K. Metcalf (44 catches for 705 yards and five scores). Carson has also done damage through the air as he has 32 catches for 227 yards and two scores from the backfield.

Quarterback Jared Goff leads the Rams’ offense, going 283 for 453 for 3,419 yards. He has thrown 13 touchdowns, though he has also thrown 12 interceptions and been sacked 19 times.

Goff’s leading receiver this year has been Cooper Kupp, who has 73 catches for 945 yards and six touchdowns. Goff has other tools in Robert Woods and Brandin Cooks, as Woods has 64 receptions for 835 yards, while Cooks (who has battled injuries) has 31 catches for 458 yards and a score.

On the ground, it is Todd Gurley who leads the way. Gurley has rushed 154 times this year for 642 yards and eight touchdowns.

I was really shocked at the spread on this one, as the Rams have just not seemed on the same level this year as their division rivals, the Seahawks and 49ers. Granted, they are playing at home in this one, but I have a hard time not picking the Seahawks.

If it weren’t for Lamar Jackson, Wilson would be hands-down MVP this season, and the defense, while not stellar, has been enough with what the offense has given. Throw on top of that the fact that Seattle has been a road warrior this year, going 6-0 on the road, while the Rams are just .500 (3-3) at home. For my money, I am taking the Seahawks -1 all day long in this matchup.