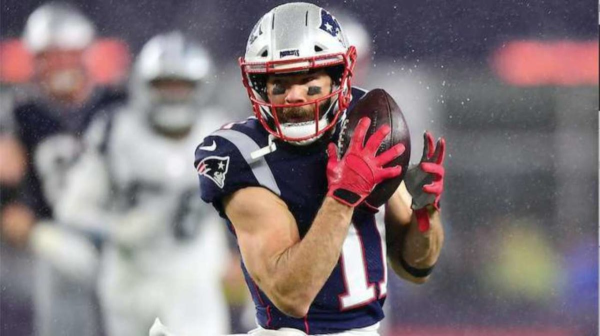 Sunday Night Football features a matchup of AFC teams as the New England Patriots (10-1) travel to NRG Stadium to take on the Houston Texans (7-4). Both of these teams currently sit atop their respective divisions but don’t have a lot of room for error. The Patriots currently sit in first in the AFC East, but they have the surprising Buffalo Bills on their heels at 9-3. The Texans are atop the AFC South but have the Indianapolis Colts at 6-5 just one game back. Kickoff for this one is scheduled for 8:20 pm ET.

The Patriots come into this one having played well all season. They have won two games in a row since their lone loss of the season to the Baltimore Ravens (37-20). Last week they beat the Cowboys, albeit in less than dominating fashion, 13-9. Still, what is scary for a Bill Belichick team is that they can beat you on the offensive side or the defensive side this season.

The Texans have played a bit more inconsistently this season. Helping their chances in the division, they beat the Indianapolis Colts last week 20-17. That evened the season series, something that was imperative for Houston as it holds just a one-game lead on the Colts in the division. The Texans will certainly have their work cut out for them again this week, though, against a tough Patriots team.

The Patriots come into this one as three-point favorites despite playing on the road. The over/under for total points in this one comes in at 46.5.

After a lackluster performance last week, the Patriots are looking to get their offense going again on Sunday and will look to Tom Brady to lead the charge. The future Hall-of-Fame quarterback currently is 273 for 439 for 2,942 yards, 15 touchdowns and five interceptions. He has also been sacked 18 times.

Sony Michel leads the rushing attack with 600 yards and six touchdowns. The aforementioned White has 39 rushes for 129 yards and a score.

With only a one-game lead on the Colts, the Texans need every win they can get. To do so, they will look to Deshaun Watson and the offense to give them a chance against the top-ranked Patriots’ defense. On the season, Watson is 249 for 361 for 2,899 yards, 20 touchdowns, and seven interceptions. While he has been sacked 32 times, part of that reason is due to his scrambling nature. Watson has rushed 58 times for 301 yards and five touchdowns.

The leading rusher for the Texans has been Carlos Hyde, who has 174 rushes for 836 yards and four scores. DeAndre Hopkins currently has 81 receptions for 839 yards and six touchdowns to lead the Texans. Between Watson, Hopkins, Hyde, and others, this is a dynamic offense that can put up points in a hurry.

Taking The Patriots On The Road

This is a pretty interesting matchup. The Patriots are 5-1 on the road, while the Texans are 4-1 at home. While Houston’s offense can be dynamic, the Patriots’ defense has been even more impressive. I am excited to watch the Hopkins–Stephon Gilmore matchup as the elite cornerback may be able to hold Hopkins in check. As a result, for the Texans to have success, they may need a big game from Will Fuller. Ultimately, I have a hard time betting against Belichick and the Patriots, especially when they are only laying three points. For my money, I am taking New England at -3.