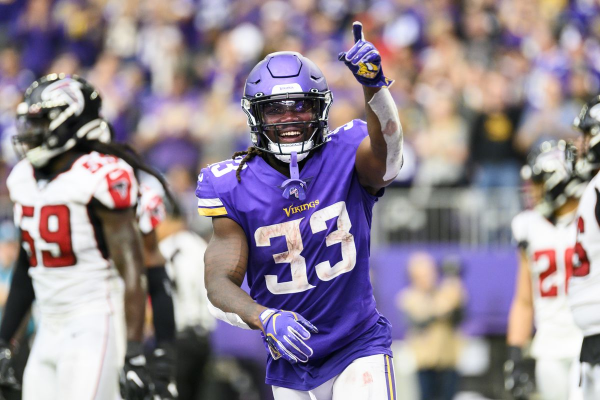 Sunday afternoon will feature an NFC North showdown when the Minnesota Vikings (2-1) travel to Soldier Field to take on the Chicago Bears (2-1). This has huge implications in the division as both teams have lost to division foe Green Bay and a second loss in the division would be a tough pill to swallow this early in the season.

With Green Bay having lost Thursday night, one of these two teams will move into a tie with the Packers (although technically Green Bay would currently hold the tiebreaker). Regardless, both of these teams will feel the pressure to pick up the win. Kickoff for this one is scheduled for Sunday at 4:25 pm ET.

Minnesota comes into this one having won 28-12 in the opener against Atlanta followed by a loss to Green Bay (21-16) and a win over Oakland (34-14). The defense is stout, and the offense has the potential to be explosive; however, Kirk Cousins is going to need to prove he can get the job done under center.

The Bears lost a heartbreaker in the opening week to Green Bay 10-3. They followed the loss by squeaking by the Denver Broncos 16-14 in week 2. Last week, though, they finally put together a full game beating the Washington Redskins 31-15. Like the Vikings, there are uncertainties under center as Mitch Trubisky has been far from elite, but their defense will likely keep them in most games.

The point spread for this one currently sits with the Chicago Bears being two-point favorites playing at home. The over/under on total points scored is set at 38.

On the offensive side, Minnesota has been the far superior team. The Vikings currently rank eighth in the NFL in points per game at 26. The Bears come in 26th overall, averaging just 16.7 points per game.

On the defensive side, it is the Bears that hold the slight edge. They currently rank second in the NFL in points allowed at 13 per game (10 at home). The Vikings come in fifth overall, allowing an average of 15.7 points per game.

With the Bears having won the NFC North last year, the Vikings would love nothing more than to dethrone the defending division champs. To do so, though, they will likely need Cousins and the rest of the offense to step up against the Bears’ elite defense. On the season, Cousins is just 37 for 63 for 502 yards, three touchdowns and two interceptions in three games. One area that has been impressive is his offensive line’s ability to keep him upright. Thus far, Cousins has only taken two sacks.

Cousins certainly has dynamic targets as Adam Thielen is one of the best in the game. Thus far he has 11 receptions for 173 yards and two touchdowns. Stefon Diggs and Dalvin Cook round out the top receivers.

Speaking of Cook, he has been on fire to start the season, leading the league in rushing yards with 375. In 57 rushing attempts, he has also added four touchdowns.

On the defensive side, Eric Kendricks currently leads the team in tackles with 21. Other leaders on the team include Danielle Hunter (three sacks) and Anthony Harris (two interceptions).

Bears Hoping Offense Can Catch Up

There is no question that the Bears have one of the best defensive units in the NFL, but the question is whether their offense can do enough to maximize the defense’s efforts. Under center for the Bears is Trubisky. On the season, he is 67 for 103 for 579 yards, three touchdowns and two interceptions. To date, he has been sacked eight times.

Trubisky’s most obvious weapon through the air has been Allen Robinson. The wide receiver currently has 17 catches for 203 yards. While the passing game has struggled, coach Matt Nagy has made a concerted effort to improve the run game over the last couple of games. Leading the way on the ground for the Bears has been rookie David Montgomery, who has rushed 37 times for 147 yards and a touchdown.

Defensively, the Bears are full of talent, but no one is more intimidating than Khalil Mack. He leads the way with three sacks despite getting double-teamed almost every snap. Leading the way in tackles have been linebackers Danny Trevathan (25) and Roquan Smith (24). Ha Ha Clinton-Dix and Kyle Fuller both lead the team with two interceptions apiece.

Vikings And The Points

From the get-go, the pick for this one was going to come down to who was being spotted the points. As the line currently sits, that is the Vikings getting two points in this game. I really think this will be a low-scoring game (reflected by the over/under). Chicago has the more dominant defense, but the Vikings have a better offense.

Still, both teams have had issues getting consistent play from their quarterback. Overall, I think this is going to be a tight game that might come down to a field goal being the difference. With the game likely to be so close, I have to go with the Vikings and the two points.