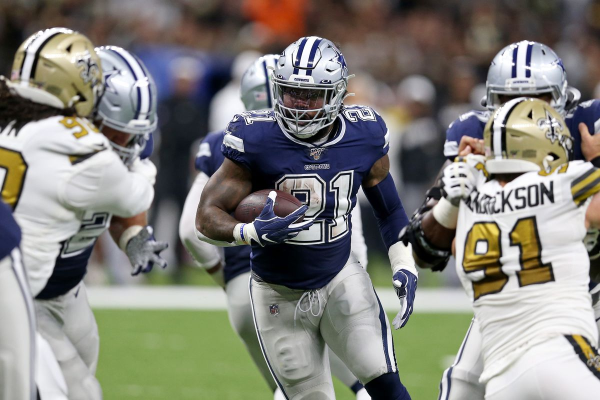 Sunday afternoon features a matchup of 3-1 teams who have playoff aspirations but are coming off rough Week 4 losses. Aaron Rodgers and the Green Bay Packers will travel to AT&T Stadium to take on Ezekiel Elliott and the Dallas Cowboys. Both teams are trying to get back on the winning side as they both face threats within their divisions that could challenge their current leads. Kickoff for this one is scheduled for 4:25 pm ET.

For the Packers, after looking dominant on the defensive side for the first three weeks, they were roughed up against the Philadelphia Eagles last week to the tune of a 34-27 loss. In the loss, the offense certainly performed, particularly Aaron Rodgers, who threw for 422 yards and two touchdowns. Despite the success through the air, their rushing game suffered as Rodgers also led the rushing attack with just 46 yards. The offense will look to continue to progress while the defense will look to bounce back against the Cowboys.

Dallas struggled last week to the tune of a 12-10 loss to the New Orleans Saints. The Cowboys’ defense still performed well, holding the Saints to just four field goals; however, the offense went stagnant, as Dak Prescott only threw for 223 yards while Elliott only rushed for 35 (although he did have a touchdown).

The Dallas Cowboys come into this one as three-point favorites playing at home. The over/under for total points is set at 47.

On the defensive side, it is Dallas that once again holds the advantage. The Cowboys currently rank third in the NFL, allowing a paltry 14 points per game (11.5 at home). The Packers have also been solid most of the season, ranking seventh overall, allowing 17.2 points per game (three on the road).

Packers Hope To Shut Down Cowboys

The Packers have to hope that they can get their rushing defense in check as they face one of the best in the game in Elliott. On the defensive side, the team leaders include Blake Martinez (47 tackles), Preston Smith (4.5 sacks) and four players with one interception apiece.

Offensively, it is still Rodgers who leads the Packers from under center. Thus far this season, Rodgers is 91 for 146 for 1,069 yards, six touchdowns and one interception. He has been sacked eight times through four games, much better than what he experienced last year. His leading receiver is Davante Adams, who has 25 receptions for 378 yards, though Adams has been ruled out of this game.

On the ground, it is Aaron Jones who leads the way, but he has gotten off to slow start, at least from a yardage standpoint. In 59 carries, he has just 195 yards (3.3 yards per carry) but has added four touchdowns.

With Green Bay’s defense ranking 26th overall in the NFL, allowing 142.2 rushing yards per game, it is certainly an opportunity for Elliott to feast. On the season, Elliott has rushed 73 times for 324 yards and three touchdowns. He has also made 11 receptions for 63 yards.

Under center is Prescott, who is 92 for 127 for 1,143 yards, nine touchdowns and three interceptions; however, he has only been sacked three times. Prescott has also rushed 12 times for 95 yards and a touchdown. His leading receiver is Amari Cooper, who has 21 receptions for 286 yards and four touchdowns.

On the defensive side, the Cowboys’ leaders include Jaylon Smith (36 tackles), Robert Quinn (three sacks) and Chidobe Awuzie (one interception). They will look to remain stingy against Rodgers and the Packers’ offense.

I have gone back and forth on this one, and while that would generally lead me to take the team getting the points, I think I like Dallas in this one. It all comes down to the rushing attack. For Green Bay’s defense, this has been a major concern. In the last few weeks, they have given up 198 yards (Week 2), 148 yards (Week 3) and 176 yards (Week 4). Enter Elliott. I think this will be a big week for the Dallas superstar as he leads them to a victory.

The Cowboys definitely need to get the offense going early after being stifled last week, but I think they will lean heavily on the run game this week, and that leads them to the promised land. For my money, I am taking Dallas -3.