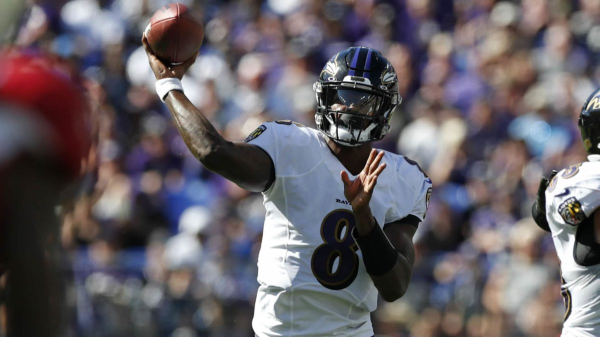 Sunday afternoon features one of the best NFL matchups of Week 3 when the Baltimore Ravens (2-0) travel to Arrowhead Stadium to take on the Kansas City Chiefs (2-0). Both of these teams have been phenomenal to start the season. While the Ravens have traditionally been able to do it on the defensive side, their offense has been equally as impressive. For the Chiefs, Patrick Mahomes continues to show why he could be the best quarterback in the league.

Coming into Week 3, the Ravens are undefeated but haven’t exactly faced top-notch talent. In the opener, they dominated the Miami Dolphins 59-10 and followed that up with a 23-17 win over the Arizona Cardinals last week. Kansas City will bring a whole new level of competition for the Ravens, though, and to add to the difficulty, they will have to try to overcome them on the road.

Kansas City has also looked solid in the first two weeks. They beat the Jacksonville Jaguars 40-26 on the road in Week 1 and followed that up with a 28-10 win over the Oakland Raiders last week. Even with Tyreek Hill on the sideline, the Chiefs are flush with offensive talent and can outscore just about anyone they face on a weekly basis.

The point spread for this one currently sits with the Kansas City Chiefs being 5.5-point favorites playing at home. This has actually moved towards the Chiefs as they opened the week as seven-point favorites. The over/under on total points scored is set at 52.

Only two weeks in, the numbers can still be pretty skewed due to low sample size, but as of right now, these are two of the best offenses in the league. The Chiefs rank fourth overall in terms of points per game at 34. The Ravens actually rank first overall, averaging 41 points per game (thanks in large part to a 59-point output in Week 1).

Ravens Offense Able To Get It Done

While we have long associated the Ravens as a defensive powerhouse, the offense has been really solid to start the season. It is in large part due to quarterback Lamar Jackson. On the season, Jackson is 41 for 57 for 596 yards, seven touchdowns and no interceptions. More impressively, he can get it done with his feet, too. On the ground, Jackson has rushed 19 times for 126 yards.

Years from now, we will probably look back and wonder why teams passed up on Mahomes for other options in his draft class. For now, though, the Chiefs are thrilled to have him. Thus far this season, Mahomes is 55 for 77 for 821 yards, seven touchdowns and no interceptions.

While the running game has been a little slow to get going, the passing game remains strong. The top trio of receivers for Mahomes thus far has been Sammy Watkins (15 catches, 247 yards, three touchdowns), Travis Kelce (10 catches, 195 yards, one touchdown) and Demarcus Robinson (7 catches, 172 yards, two touchdowns). Even with an injured Hill out of the lineup, this offense is still locked and loaded.

If the Ravens play the way that they have shown they are capable over the first two weeks, anything is possible in this matchup. Still, I tend to lean to the Chiefs for two reasons. First, they are playing at home, where last season they were 7-1 overall and will be amped up as this is their home opener.

Second, the line has moved in favor of Kansas City. Had it been at the seven points that it opened at, I might be inclined to take the Ravens; however, with it moving to 5.5, I still like the Chiefs to win and cover. I wouldn’t blame you if you took a shot on Baltimore, but for my money, I am going with the Chiefs at -5.5.