Still No Zeke; Should The Cowboys Panic? 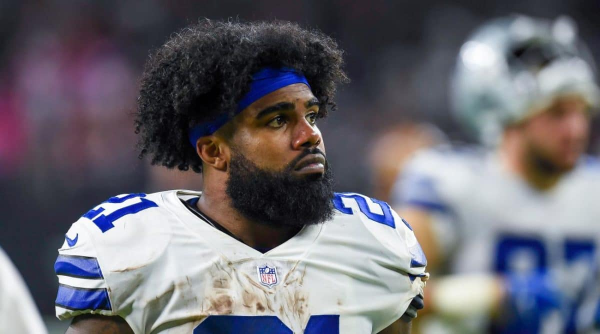 As the Dallas Cowboys prepare to host the New York Giants in their season opener Sunday afternoon, they’re doing so without one of the most prolific offensive weapons in all of football, Ezekiel Elliott.

While Dallas has gone through training camp and the preseason, Elliott has yet to show amid a holdout with the star running back wanting a new contract. Elliott is currently on his rookie deal.

If a contract isn’t agreed to very soon, the Cowboys will be playing meaningful football without a Pro Bowler and former first-team All-Pro player who figures to contest for the rushing title if he were to play all 16 games.

In 2018, Elliott rushed for 1,434 yards and six touchdowns while adding another 567 yards and three touchdowns as a receiver. That production relieved pressure on Dak Prescott and ultimately helped Dallas to a record of 10-6.

After rushing for 137 yards in the Cowboys’ 24-22 victory over the Seahawks in the Wild Card round of the playoffs, Elliott has proven himself an integral piece to a team that considers itself a Super Bowl contender this year.

But with Elliott yet to report, is it time to panic in Big D?

Cowboys With and Without Elliott

Fans of the Cowboys received a boost over the past few days as reports coming out of Dallas said talks between Elliott and the franchise were intensifying. The Cowboys also released all but two running backs plus Jordan Chunn (a practice-squad player), which could point to Dallas’ confidence in signing Elliott sooner rather than later.

If the Cowboys want to get off to a fast start this season, that confidence needs to turn into a deal very soon.

While Dallas has veteran running back Alfred Morris and rookie fourth-rounder Tony Pollard ready to take Elliott’s position, the stats tell us Zeke makes a difference that would be hard for anyone to replicate.

With Elliott on the field, the Cowboys have gone 28-12 on the back of an offense that can control the time of possession and put together long drives. On top of outscoring opponents by 188 with Zeke in the backfield, the Cowboys also average 4.7 yards per rush and 361.5 yards per game.

Without Zeke, Dallas has been a very average 4-4 team that struggles to find the end zone. In those eight games without Elliott, the Cowboys have been outscored by 36 points, have earned just 3.9 yards per carry, and have averaged 297.3 yards per game.

Elliott has also become more a part of the offense every year since joining the team. After taking part in 71.3 percent of snaps during games he was available for in 2016, Elliott took part in 85.5 percent of such snaps in 2017 and 89.2 percent in 2018.

So, how long can Dallas afford to have Elliott anywhere but in its backfield?

Can Dallas Survive Without Zeke?

Owner Jerry Jones knows that he has a team ready to make another run at playoff football and possibly contend for the Lombardi Trophy. However, those plans include Elliott.

And in a division also featuring the Philadelphia Eagles, Dallas can’t afford to let a contract dispute get in the way of having Elliott on the field for an extended period. In the NFC East, the Eagles are the favorite to win with -160 odds, followed by the Cowboys at +160.

Oddsmakers also have the Cowboys’ win total set at nine games, which means a playoff berth could come down to Week 17 if a division title isn’t already in the bag.

As far as the Super Bowl goes, Dallas is a top-10 team but certainly not enough of a favorite to take the field without its star running back on many occasions. With odds ranging from 18-1 to 20-1, the Cowboys are significantly behind the likes of New Orleans (9-1) and the Los Angeles Rams (11-1) to win the Super Bowl from the NFC.

So, while Cowboys fans can be optimistic about the progression of contract negotiations with Elliott, it will be time to panic if Zeke isn’t on the field within the first couple of weeks of regular-season football.