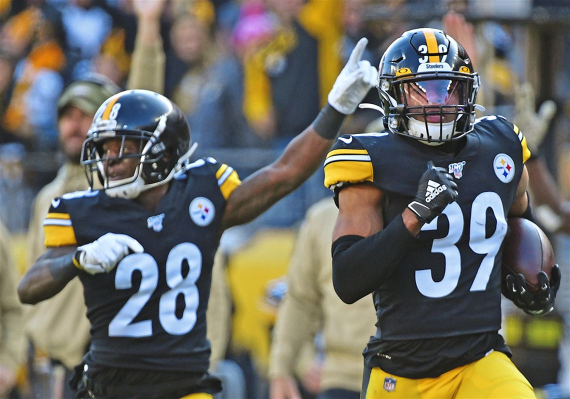 When the Pittsburgh Steelers started 0-3 while losing starting quarterback Ben Roethlisberger to injury for the season, they looked more likely to compete for the first overall draft pick than the playoffs. But with Sunday’s 17-12 win over the Rams, Pittsburgh now sits at 5-4 with every chance to challenge for a spot in the postseason.

Getting above .500 for the first time all season was far from easy, but a dominant performance from the Steelers’ defensive unit saw them through to victory. Pittsburgh held Los Angeles to a single touchdown and a single field goal, with the other two points allowed coming via a safety.

Although the Steelers didn’t have the most productive day on offense, it was Rams quarterback Jared Goff and the Los Angeles offense that had the hardest time. In addition to being sacked four times, Goff was 22-for-41 for 243 yards with no touchdowns and two picks.

Star running back Todd Gurley was non-existent in the fourth quarter, and no Rams receiver racked up more than 95 yards.

Instead, it was the Pittsburgh D that carried the day, led by safety Minkah Fitzpatrick. Since coming over from Miami via trade after Pittsburgh started 0-2, Fitzpatrick has seemed to transform this Steelers defense into a formidable force, and Sunday was no different.

In addition to an interception that sealed the game for the Steelers in the fourth quarter, Fitzpatrick returned a fumble 43 yards for a touchdown to put Pittsburgh up 14-7 – a lead it would never relinquish.

At 5-4, the Steelers still trail Baltimore in the AFC North, but they’ll have a chance to fight for a playoff berth down the stretch.

Pittsburgh felt like an afterthought following their winless start to the season. Now, due in large part to the addition of Fitzpatrick and his five interceptions in seven games with the team, the Steelers have life.

It’s also worth noting that, while playing their first games with backup quarterback Mason Rudolph leading the offense, Pittsburgh played perhaps the most difficult schedule of any NFL team through the first three games of the season.

After starting off against New England, which is the odds-on favorite to win the AFC, the Steelers fell to the Seahawks, who now sit at 7-2, before losing to the last remaining undefeated team in the league, San Francisco.

So, while 0-3 isn’t a record anyone can be proud of, that early stretch likely gave us a misconception about just how good or bad this Pittsburgh team is.

With momentum now rolling, the Steelers face one of the easier remaining schedules in the NFL. Of their seven games, only those against Buffalo and Baltimore will feature teams with a winning record on the other side of the ball.

For now, the Steelers have very winnable games against their next four opponents: Cleveland, winless Cincinnati, Cleveland again, and Arizona.

Odds On a Steelers Playoff Run

Pittsburgh’s first path to the playoffs would be an AFC North title. As it stands, the Steelers are in second place within the division thanks to their 5-4 record. Ahead of Pittsburgh is Baltimore, which has earned a 7-2 record with an MVP candidate at quarterback in Lamar Jackson.

With Baltimore’s 37-20 win over New England last week, the Ravens announced themselves as one of the teams to beat in the AFC, so it’s unlikely Pittsburgh will be able to catch and surpass them.

Right now, the Ravens are the heavy AFC North favorite with odds of -700, and the Steelers follow behind at +375.

But when it comes to the Wild Card race, Pittsburgh has more than an outside chance of earning one of the two available spots. According to the odds, the Steelers hold the fifth-best odds of winning the AFC at +2000. That puts them ahead of Buffalo (+3000), Oakland (+3300), and Indianapolis (+4000).

In fact, only the four division leaders currently hold better odds than Pittsburgh of winning the conference, so the Steelers can be considered a Wild Card favorite at this point in the season.