Steelers Come From Behind Against Dolphins; Where Do They Each Go From Here? 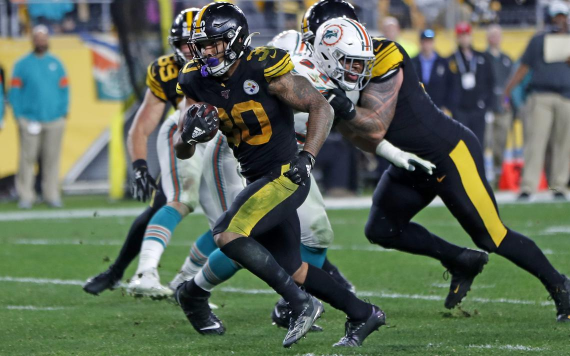 After the Pittsburgh Steelers’ come-from-behind win over the Miami Dolphins on Monday Night Football, we’re left with two big questions.

First, do the Steelers still have life without Ben Roethlisberger at quarterback? And second, are the Dolphins going to go winless through 16 games?

Miami gave its fans a jolt of hope last night when it started the game with a two-touchdown lead on the back of a 14-0 first quarter. After that, it was all Steelers, who scored 27 unanswered points over the final three quarters of play.

With Monday’s result, Pittsburgh has moved into second place in the AFC North with a record of 3-4, trailing only the 5-2 Ravens. The losing Dolphins are now 0-7 on the season and have one eye already focused on the 2020 draft.

In the end, the biggest difference between the Dolphins and Steelers was the ability to run the football. While Miami racked up only 60 yards on the ground, the Steelers rushed for 159 yards in the game.

And while Dolphins quarterback Ryan Fitzpatrick threw for 190 yards and two touchdowns, he also threw two picks to safety Minkah Fitzpatrick, who was traded to the Steelers by Miami earlier this year.

Now it’s time to look at just how possible a Pittsburgh playoff run is, and how likely it is that Miami fails to win a game this season.

It wasn’t long ago that Pittsburgh had the best offensive weapons in football between Roethlisberger, Antonio Brown, and Le’ Veon Bell. Now, with Brown and Bell out of Pittsburgh and Big Ben sidelined with an injury, the Steelers are doing everything they can to put points on the board.

As a team, the Steelers are scoring 21.4 points per game on 300 yards of offense while allowing 20.7 points per game on 359 yards.
That sort of production won’t earn postseason football in most cases, but Pittsburgh has shown improvements over the last several weeks.

After starting 0-3 against the tough schedule of New England, Seattle, and San Francisco, the Steelers have now won three of their last four. However, all three wins have come against poor teams: the Bengals, Chargers, and Dolphins.

So, can the Steelers make a playoff push?

If they’re going to make any noise, Pittsburgh will need Mason Rudolph to pick up his play and continue protecting the ball. So far, Rudolph has thrown for 897 yards, nine touchdowns, and three interceptions.

With a playmaker like JuJu Smith-Schuster, who has 30 catches for 443 yards and three touchdowns, Rudolph should be able to get the ball downfield more.

The biggest issue facing the Steelers is playing in a division with the Ravens, who are the odds-on favorite to win the AFC North at -350 compared to Pittsburgh’s +600 odds.

But when it comes to a Wild Card spot, the Steelers certainly aren’t out of the race despite having +4364 odds of winning the AFC. At 3-4, the Steelers trail two other second-place teams, the 5-2 Bills and 5-3 Texans.

So, while Pittsburgh hasn’t looked like a playoff team, it does have a shot at postseason football in a weak AFC.

Will the Dolphins Win a Game?

Coming into Monday Night Football, the 2-4 Steelers looked like an opponent the Dolphins could actually beat. And after a 14-0 first quarter, Miami was in total control.

But a franchise that appears to be aiming for the first overall pick in the 2020 draft looked inept through the final three quarters of play and fell to 0-7. With nine games remaining, will the Dolphins go winless?

Luckily for fans in South Florida, the Dolphins still have several winnable games on the schedule. Starting with next week’s game, Miami will finish the season with contests against the Jets (twice), Browns, Giants, and Bengals.

Keep in mind that the Bengals are yet to win a game, as well.

The Dolphins are just three-point dogs against the Jets next week, so the potential for a winless season in Miami could be over in fewer than seven days.