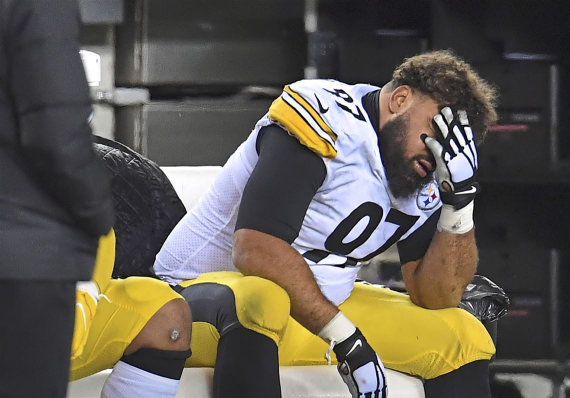 Just a few short weeks ago, the Pittsburgh Steelers were 11-0, atop the ladder in the AFC and five wins away from a perfect regular season. An NFC North title was all but guaranteed, and Mike Tomlin’s men were well-placed to make a run at a seventh Lombardi Trophy for the franchise.

Fast forward a few weeks, and the Steelers have lost three in a row, following losses to Washington and Buffalo with another subpar performance in a 27-17 loss Monday night at Cincinnati, who came into the game 2-10-1. The Steelers are no longer in top spot in the AFC, with the Kansas City Chiefs having blown by them, and the AFC North title has gone from being a guarantee to being up in the air, with the 10-4 Cleveland Browns now within striking distance.

The Steelers’ latest loss was not the only upset of Week 15, which saw the New York Jets finally win their first game of the season, and in doing so, alter their chances of earning the first pick in the 2021 NFL Draft and the Los Angeles Rams’ chances of winning the NFC West.

The latest NFL futures betting odds have had some notable changes after Week 15’s actions, which also saw the Green Bay Packers move into top spot in the NFC, ahead of the New Orleans Saints. The Saints welcomed Drew Brees back into the starting lineup but fell in a thriller at home to the 13-1 Chiefs, who are still sitting pretty as the NFL championship favorite after their ninth win in a row,

With the Steelers taking a dive, the Buffalo Bills have now taken their place as the second favorite in the AFC. The Bills are 11-3 following a 48-19 win over Denver, their fourth win in a row. Notably, the Ravens are in a strong position in NFL and AFC championship odds despite still sitting in eighth in the AFC, tied with Miami at 9-5 but currently losing out to the Dolphins on the tiebreaker.

Meanwhile, in the NFC, the Packers are now a +200 favorite to win the NFC, now that the top seed and homefield advantage in the postseason is now in their grasp. The Rams, despite their inexplicable home loss to the Jets, did not take a big drop, though they are now a game behind the Seahawks in the NFC West heading into a Sunday showdown in Seattle that could decide the division.

Just when it looked like the NFC East race was all but down to two teams, it will now head into the last two weeks of the regular season with all four teams still firmly in contention to win the division title.

That includes the Dallas Cowboys, who beat San Francisco 41-33 to win their second in a row and move to 5-9. The Cowboys were the only team in the division to win in Week 15, which means that they are still in the mix. A lot has to happen for the Cowboys, who moved from +3900 to win the NFC East to +1400 following their win over the 49ers, but the chance is still there.

That being said, 6-8 Washington, who could not rally to beat Seattle at home, is still the favorite to win the division at -260, ahead of the 4-9-1 Eagles (+550), who lost at Arizona but still edge out the 5-9 New York Giants (+600) and the 5-9 Cowboys (+1400). In Week 16, Philadelphia travels to Dallas in a matchup that could be meaningful or meaningless, depending on if Washington wins at home against Carolina. The Giants, who were in the driver’s seat two weeks ago due to owning the head-to-head tiebreaker over Washington, visits Baltimore needing to win to keep their hopes alive.

Seventh Seeds Still Up for Grabs

Only a few divisions are all but decided, so there are a number of matchups in Week 16 that will prove to be pivotal in that regard. But in addition to some key games in division title races, there are also a number of games that will be key to deciding the other playoff positions.

Baltimore and Miami are jostling for the seventh seed at present, though two wins for either could see them finish with the fifth seed, depending on how things finish out in the AFC South, where Tennessee and Indianapolis are both 10-4, and with the Browns, who are 10-4 heading into their last two games against the Jets (road) and Steelers (home).

After extending their hot and San Diego’s cold streak, the Seattle Mariners will be looking to leave Petco Park with a two-game sweep as they take on the Padres this afternoon. Yesterday, the Mariners pounded out a dozen hits and plated eight runs, and Chris Flexen pitched 6.2 shutout innings to collect his third straight END_OF_DOCUMENT_TOKEN_TO_BE_REPLACED