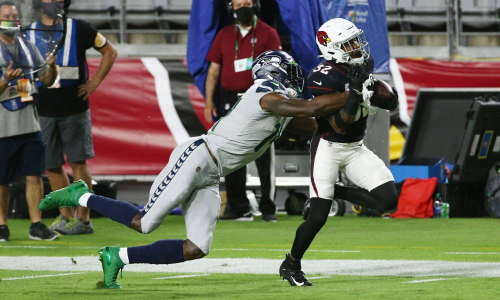 In what looks to be a crucial NFL Week 11 contest, the Arizona Cardinals (6-3 SU, 5-4 ATS) go head-to-head against the Seattle Seahawks (6-3 SU, 5-4 ATS) on Thursday night. The match would be broadcast on FOX/NFL Network on November 19 at 8:20 pm ET at the CenturyLink Field in Seattle, following the COVID-19 restrictions.

In this NFC West battle, the stakes are high as the Seahawks and Cardinals form part of a three-way tie atop the division. On that night, the Cardinals will be searching for their third road victory of the season. In their last six Thursday Night Football games overall, the Cards have a record of 3-3.

Will the Arizona Cardinals Pull Another Hail Mary?

Last Sunday, the Cardinals defeated the Buffalo Bills in what can be described as the craziest ending to an NFL game this season. The Cardinals walked off  the game with a completed 43-yard Hail Mary touchdown pass, from Kyler Murray to DeAndre Hopkins, who made an amazing catch in triple coverage. Murray threw for 245 yards with one touchdown, one interception and added two scores via the ground. Kenyan Drake, who made his return from injury, rushed 16 times for 100 yards, while Hopkins made seven catches for 127 yards.

The Cardinals average an NFL-best 425.4 yards per game, aided by their league-leading rushing attack. They’re averaging 168.9 rushing yards per game with 5.3 yards per carry and they’ve already accumulated a stunning 15 rushing touchdowns this season. Kliff Kingsbury’s boys are also averaging 29.6 points per game which ranks them 7th in the NFL in that category.

Against a home offense in Seattle that will be trying not only to atone for its previous loss to the Cardinals, but also to fix their reputation after a recent rough patch. It’s safe to say that the defense of the Cardinals will not have it easy in this fixture.

This new iteration of the Cardinals has its first real traction with four wins in five games and a first-place tie going into week 11, and what happens next is crucial. With recent victories over teams like the Bills and Seahawks, who seem playoff-bound, a Cardinals team that many accuse of being a gimmick, are beginning to find some consistency.

Are the Seahawks Losing Steam?

After starting the season 5-0, The Seattle Seahawks are just 1-3 in their last four games, and have gone from one of the top contenders in the NFC to a team with a lot of concerns in just a month. An issue that has come into full view that was somewhat camouflaged by a high-powered offense, is a really thin defensive unit. Since the offense slowed down, it gave way to a defense that was like a pipe ready to burst, and now we have a team that has a lot on its plate going into Week 11.

Wilson, who was once favored to be named the NFL MVP, has toppled down the oddsboard after losing a fumble and being picked off twice in last weeks 23-16 loss to the rival Rams. However, Wilson led his team with 60 yards in rushing, even though he did not throw a touchdown pass. The ‘hawks went into the fixture without their top two running backs, Chris Carson and Carlos Hyde, to injury. They also lost their top two cornerbacks, Shaquill Griffin and Quinton Dunbar, to injuries.

While this is a tough call to make, we are inclined to go with the Arizona Cardinals, who have found their fighting spirit and are ready to go the distance.

Prediction:Arizona Cardinals to win (+138) at FanDuel