Seahawks at Eagles; Can Wentz Uplift the Eagles’ Struggling Passing Attack Against the Leagues-Worst Pass Defense? 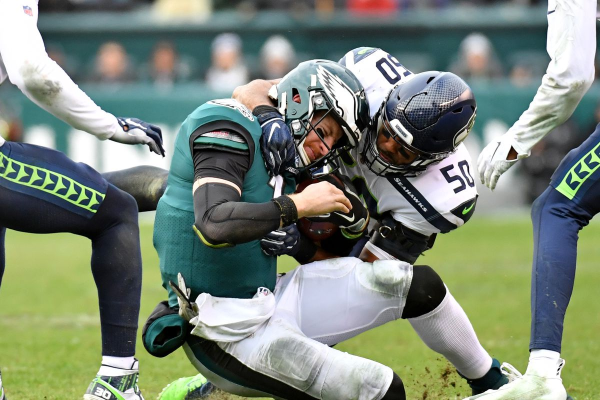 The 7-3 Seahawks are coming off what could almost be considered a bye week; after beating the Arizona Cardinals on Thursday Night in Week 11, Seattle will have had 10 days off between this game. The 3-6-1 Eagles are coming off a close loss to the Cleveland Browns and will look to try and turn around one of their last chances to make a push for the postseason as apart of the NFL’s worst division; the NFC East. The game will kick-off on ESPN at 8:15 p.m. EST on Monday, November 30th.

The matchup between the Eagles offense and the Seahawks defense will be the key to this game; both are their team’s weaknesses. The Eagles are fifth-worst in the NFL in passing yards averaged per game at only 209, while the Seahawks give up a league-high 343 yards passing per game. Which team will be able to break their average? This is a perfect opportunity for Eagles quarterback Carson Wentz to silence the ongoing discussions about benching him.

If the Eagles hope to win, their passing attack has to come through as the Seahawks have been very good in their run defense this year, ranking top five in the league, only allowing 91.2 yards per game. Establishing the run will help Wentz open up the offense, but they cannot plan on running the ball successfully without any passing threat; the Seahawks will hone in on the run and pin their ears back.

Wentz is more than athletic enough to present troubles for the Seattle defense if he can get it going through the air; the Seahawks have been prone to allowing huge yardage versus mobile quarterbacks. The Eagles will dial-up bootlegs and play-action misdirections to keep the Seattle defense on their toes. Wide receiver Travis Fulgham, Wentz’s favorite target, will need to have a big game along with tight ends Zach Ertz and Dallas Goedert.

The Seahawks’ key will be their pass rush; if they can generate pressure, it will help rattle Wentz and leave less time per play that their struggling secondary will have to be in coverage. The addition of ex-Cinncinatti Bengal defensive end Carlos Dunlap has provided the needed boost to the pass rush they previously lacked. Jamal Adams, who they often blitz, is fully healthy now too. Look for the Seahawks to dial up the pressure and come after Wentz to shake-up the Philadelphia pass game.

Seattle’s offense, led by Russell Wilson, ranks second in the NFL in points per game at 31.8; they have no trouble scoring the ball. They match up very well against the Philadelphia defense, which allows over 130 yards rushing per game; with both of Seattle’s main running backs, Chris Carson and Carlos Hyde, healthy together for the first time in weeks, it would be no surprise to see a heavy dose of the ground game. This will open up deep shots through play-action to one of the best wide receiver duos in the NFL; Tyler Lockett and D.K. Metcalf.

The Seahawks offense has too much firepower for the Eagles offense to keep up with, averaging nearly 10 fewer points per game; it will take great efforts on both sides of the ball for the Eagles to win this one. This will be one of the biggest games of Wentz’s career; if he cannot perform against the worst pass defense in the NFL, he may lose his job. Look for the Seahawks to prevail on primetime.