Sam Darnold is out with Mono. Are the Jets really that much worse without him? 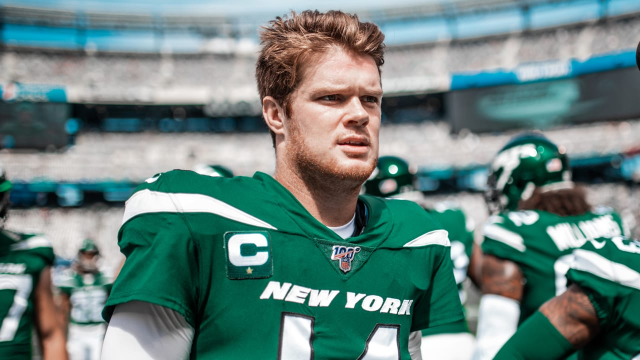 Mono is usually the kind of thing you catch when you’re in high school or away at college. Well, for SamDarnold, the former Jets starting QB, that sort of thing is usual business, apparently. Darnold being out with mono doesn’t mean he’s placed on injured reserve, but he will not be starting for the Jets, at least for the foreseeable future. Instead, Trevor Siemian of Denver Broncos fame (or infamy, depending on how you look at it) will be starting in place of Darnold until he gets over his bout with mono. So what are the long-term implications of the shift, and ultimately, how bad is the change in QB going to affect the Jets?

From Bad to Worse

The Jets were not in a great place in terms of their QB position to begin with. While Sam Darnold is still a sophomore QB with a lot of promise, certainly more promise than Trevor Siemian, the Jets field general situation was not looking too great. The hope is that Darnold will be able to show some of the promise that made him one of the highest-touted QB prospects coming out of USC just two years ago, but as it stands, things have gotten a lot worse for the New York’s AFC team. The Jets can expect the offense to not change all that much, as Le’Veon Bell should still be getting lots of snaps to make up for the fact that their slightly-better QB is not out sick. That said, Siemian isn’t that much of a downgrade in all fairness.

The Jets will have to brace themselves for turnovers, 3-and-outs, and a whole lot of other typically Trevor Siemian occurrences, all of which are an unfortunate side effect of having him be your starting quarterback. The defense will have to make up for this hit on the offense, and if things proceed in this sort of manner, there is no doubt that we are going to see some people start questioning their job security.

If you have the courage to risk your hard-earned money on the Jets, this is not a bad time to do so. While they are definitely not going to be winning a lot of games anytime soon, the Jets will be getting better numbers against the spread, especially as underdogs. The lost of Darnold may result in people overreacting and assuming that they are a lot worse without Darnold. Frankly, when you lose Darnold, the team is just about where they should be. Without Darnold and with big-time public favorite Cleveland coming into town on Monday Night Football, this is a prime spot to fade the over-bet Browns and ride with Trevor Siemian and the boys.

The Jets, while a bad football team, are certainly capable of beating the Browns, who really aren’t all that great by themselves. If you’re looking for a good spot to really bet on the Jets, this is going to be a great opportunity. As much trash as we are talking about Siemian, remember, you don’t need a team (underdog teams at least) to win the game for you to win by wagering on them. To get 6.5 points at home is a pretty decent clip, and if you’re the Browns, who didn’t look all that great at home against the Titans, laying 6.5 points a week following a really embarrassing loss doesn’t necessarily bode well for you.

The Jets were leading most of the game against the Bills until a late-game touchdown snag beat them by a point.

The Jets aren’t very good, but frankly, there is more value in Darnold not being there than there is with the Jets as is. Ride with them… but on the spread only.