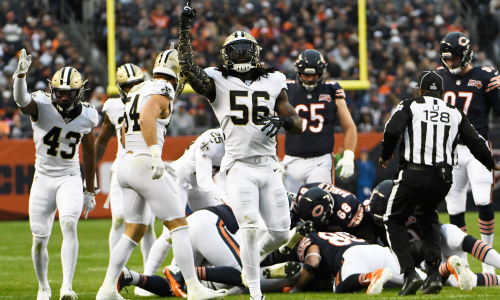 Drew Brees has always had the reputation as a quarterback who plays much better indoors. The slower the surface and the colder the weather, the worse he gets. His career numbers actually prove the idea. His QB rating indoors is 104.8, while it’s 91.8 outside. A trip to Chicago would seem to be a daunting task, particularly this Sunday when the forecast calls for temperatures in the high 30’s with significant winds. The question is, can the Bears score enough to make any of these numbers matter. Matt Nagy, offensive genius, is a title Bears fans are getting tired of hearing.

I wish Dennis Green were still with us so he could yell, “the Bears are who we thought they were!” The problem is, I have no idea who we think they are. Who is this team? They’re 5-2, but at no point have they really looked like a 5-2 team. They had unlikely rallies to beat the Lions and Falcons this year and snuck out a one point Thursday night win over the Bucs. They also beat the lowly Giants at home by just four. Nick Foles has a cool nickname but isn’t living up to it right now, as only the Giants and the Washington Football Team have scored fewer points than the Bears in the NFC. What they do have, is defense. As much as the Bears may not be who we think they are, they do keep games close and low scoring, which is a pretty powerful combo when you’re getting 4.5 points.

Are the Saints Who We Think They Are?

There’s a quick way to scan a page and figure out who the overrated teams are in a league. When their real record and their ATS record are significantly different, you may have yourself a team that is not quite as good as the betting public thinks they are. I give you the 4-2 New Orleans Saints, who are just 2-4 ATS and have a season point differential of just +6. They’ve won three straight, but by a total of just 12 points and against underwhelming competition. Part of their downturn offensively this year is the fact that they’ve been without star receiver Michael Thomas for much of the season. That holds true again this week as Thomas has been ruled out of this game.

In four of the seven games the Bears have played this year, they’ve scored 10 points or less in the first-half. They are not a fast-starting team, especially if they don’t get turnovers. Brees is not likely to turn it over as he’s thrown just three interceptions all year. Take a long hard look at the Bears game prop to score under 9.5 first-half points. The over is -115, the under is -120. I love the under here, as the Saints play solid defense and the Foles led Bears offense lacks any sort of sparkle. But as mentioned, the Bears play it close and low scoring, so I think you can try to steal some dollars on the Saints first-half scoring prop, which sits at over/under 12.5. I like the under here too. I think both teams feel each other out here and the defenses win, especially in the first half.

Chicago has a few things going in its favor here. They’re playing good defense, and they’ve got Brees outdoors in chilly, windy weather. That should keep the Saints from running away in this one. The Bears will also play with a chip on their shoulder after a poor Monday night showing against the Rams. I think these factors are enough to make the Bears the pick on the game line, but I don’t think it’s enough to give them the actual game. Avoid the money line, this one feels like a game-winning field goal at the final gun for Will Lutz. And field goals, rather than touchdowns, will be the order of the day, so I also like the under. The Saints win, but do not cover in a bit of a pre-winter slugfest on the first day of November.