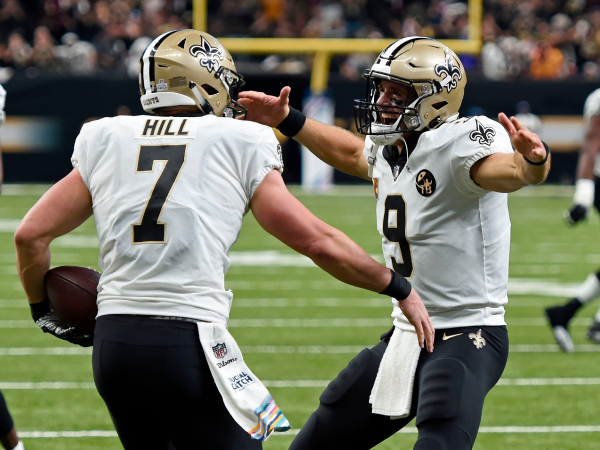 When the 2020 NFL season commences, the Saints will likely have one of the most well-known quarterback rooms in the league. To support future Hall of Famer Drew Brees, New Orleans extended backup Taysom Hill through 2021 and is now planning to bring in former Buccaneer Jameis Winston.

After throwing for 5,000 yards and 33 touchdowns, albeit while tossing 30 interceptions, Winston has finally found a home a month since being released by Tampa Bay in the wake of the Tom Brady signing.

The expected one-year deal figures to place Winston in the role played by Teddy Bridgewater a season ago. Bridgewater filled in for an injured Brees, leading the Saints to a 5-0 record during his spell as a starter before signing a three-year, $63 million deal with Carolina this offseason.

Meanwhile, the Saints were eager to lock up Hill, a quarterback coach Sean Payton sees as the potential QB of the future in New Orleans.

Hill was previously on a one-year, $4.6 million deal as a restricted free agent. His new deal is worth two years and $21 million, $16 million of which is fully guaranteed.

Despite only having thrown 15 passes in his three-year career, Hill expects to compete for the starting job once Brees calls it quits. “This gives me a clear trajectory and opportunity for me to compete and to be the guy in New Orleans in (2021) if Drew decides to be done,” Hill said of his new contract.

Winston, Hill to Compete for No. 2 Job

While Winston has proven he can put up big numbers in the passing game, Hill has been a dangerous weapon as a multipurpose player for the Saints. Now, the two players are set to compete for the backup quarterback role, sort of.

Because Hill is utilized by New Orleans in so many ways — as a quarterback, running back, receiver, and special teamer — he’ll be on the field every single week. Winston will likely only see the field if Brees suffers another injury.

Even then, it’s unclear how the Saints will use their two backups. Will Hill keep his normal do-it-all role while Winston becomes the main quarterback? Will the two split time under center? Will Hill be given the chance to prove himself as the quarterback of the future will the full-time QB job?

Much of that decision figures to be made by how Winston performs in the film room and on the practice field once football gets back underway. The former Buccaneer will be eager to improve under Payton to find a starting spot — and the contract that comes with it — next offseason.

By bringing in a 5,000-yard passer and locking up its multipurpose offensive specialist, New Orleans has bolstered the most important position in sports as they aim to make another run through the NFC with Super Bowl aspirations.

But are the Saints a favorite in a loaded conference?

San Francisco will also be aiming to reach another Super Bowl after claiming the NFC crown last season. The Packers remain a threat with one of the best quarterbacks in football. The Buccaneers are an instant contender after signing Tom Brady and trading for Rob Gronkowski.

Even teams like the Cowboys, who have a roster full of talent and enjoyed one of the better drafts in the NFL, are set to compete in the NFC.

So, where do the Saints fit in?

According to FanDuel Sportsbook, New Orleans is the second favorite in the NFC and the fourth-favorite overall to win the Super Bowl with odds of +1200. While the Chiefs (+650) and Ravens (+700) lead the way, only the 49ers have better Super Bowl odds (+900) as a conference opponent.