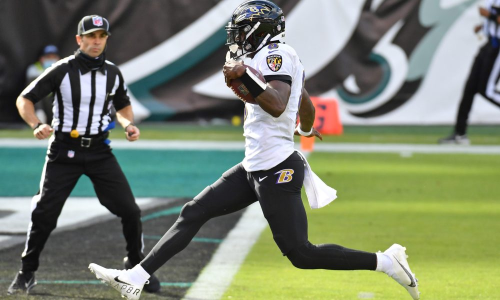 The Baltimore Ravens will be traveling to the Gillette Stadium, Foxborough, Massachusetts, on the 15th of November to continue the rivalry with the New England Patriots. The match will be broadcasted live on the NBC TV Channel and will kick off at 8:20 PM EST.

Although these two teams are from different divisions, their rivalry has been consistent and very competitive.

The Baltimore Ravens to Continue their Away Run?

The Baltimore Ravens, after suffering a defeat at the hands of their AFC North Division rivals, the Pittsburgh Steelers, have announced their comeback with a commendable victory over the Indianapolis Colts. The 24-10 victory bumped up the team’s record to a 6-2, with 4-0 in away games.

The two teams had met a total of 14 times since the late 1990s when the rivalry began. Baltimore Ravens beat the New England Patriots by a final score of 37-20 the last time these two teams met in November 2019. This last meeting saw the introduction of Lamar Jackson to the rivalry as the new quarterback for the Baltimore Ravens. The Ravens have a record of 28.4 points per game and an average of 362.3 yards of offense per game; 192.1 in passing yards and 170.1 in rushing yards per game. The Ravens are ranked 2nd in offense in the NFL.

The Ravens quarterback Lamar Jackson accumulated a total of 1,513 yards in passing this season, scored 12 touchdowns, and 4 interceptions. Lamar Jackson happens to be the leading rusher for the Baltimore Ravens, with rushes for a total of 469 yards with 79 carries and scoring 3 touchdowns. Wide receiver Marquise Brown is on the season’s leaderboard with 30 receptions for 417 yards and 2 touchdowns.

On defense, the Baltimore Ravens are ranked number 1, having allowed an average of 17.8 points per game and an average of 347.8 yards in offense form oppositions, 246.8 in passing yards, and 101.8 in rushing yards.

The Baltimore Ravens are ranked 2nd in the AFC North Division. With momentum on their side following the win over the Indianapolis Colts, the team will be looking to continue winning. However, the Ravens have a number of players whose availability for Sunday’s game is in doubt, including defensive end Calais Campbell, linebacker L.J Fort, running back Mark Ingram III, center back Jimmy Smith, and linebacker Matthew Judon. Despite the probable unavailability of these players, the Baltimore Ravens should be formidable in this rivalry come Sunday.

Will the New England Patriots Offense Spark a Victory?

The New England Patriots managed to squeeze a 30-27 victory out of the New York Jets in their last game, gaining a total of 433 yards of offense against the Jets and allowing 322 yards of offense from their opponents. In the game, New England quarterback Cam Newton passed for a total of 274 yards with no touchdowns or interceptions while running back Damien Harris rushed for 71 yards with 14 carries.

The Patriots quarterback Cam Newton has accumulated 1,417 yards in passing this season, scored 2 touchdowns, with 7 interceptions. Running back Damien Harris has secured 63 carries in 350 yards with 1 interception. Wide receiver Damiere Byrd has 26 receptions for 337 yards with no touchdowns.