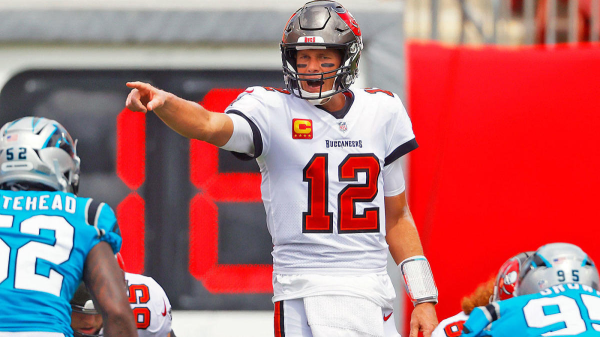 It has not been all smooth sailing for Tom Brady and Tampa Bay, but with six games left, they are in the mix for both the NFC South title and the #1 seed in the NFC. With Drew Brees out for at least the next few weeks, the Bucs will be hoping the 7-2 Saints can provide an opening in the division race.

As tight things are atop the NFC South, they are even tighter in the NFC West. Coming into Week 11, the Rams, Cardinals, and Seahawks were all tied for the division lead at 6-3. With Seattle holding off Arizona on Thursday night, the Rams go into Monday night’s matchup needing to win to keep pace.

Prolific offense vs. stingy defense:The Bucs haven’t been the machine that some may have expected upon Brady’s arrival, but they have been pretty good. Sunday’s 46-23 win at Carolina was their second 40-point output of the season and the fifth time they have scored 30+ points.

They will be up against a big challenge in a Rams defense that entered Week 11 second in the NFL in fewest points allowed per game (18.7). When the Rams hold an opponent under 20 points, they are 6-0. When they don’t, they’re 0-3. Which side comes out on top in that statistic is likeliest to come out on top in the game.

Are these two only good against bad teams? As impressive as the rout of Carolina was, it was a win over a 2-7 team and does not really give much of an indication as to who the Bucs are or will be.

In routing the Packers and Raiders in back-to-back weeks by a combined total of 83-30, Tampa was really, really good. But in a 38-3 disaster at home against the Saints in Week 9, they were awful. In five games against teams that are currently .500 or better, they are 2-3.

The same can be said for the Rams. They were highly impressive in a 23-16 win over Seattle in Week 10, holding the Seahawks to only a field goal in the second half and forcing three Russell Wilson turnovers. But they are at their best at home, with both of their road coming against teams from the NFC East (which stinks, if there is anyone who hasn’t been paying attention).

Bucs 1st half -3: In the first half of road games against teams with a pulse (Buffalo, San Francisco, and Miami), the Rams have been outscored 70-19.

Bucs 1st half over 23.5: Following on from the above bet, this is a nice one to back at excellent odds. In those aforementioned three games, the Rams gave up 21, 21, and 28.

Ronald Jones over 53.5 rushing yards: The Rams are one of the league’s best teams against the pass, so the Bucs will need to produce on the ground to keep them honest. After a tough stretch, Jones had a huge day against the Panthers with 192 yards, including a 98-yard touchdown run. Jones has topped the target total six times in ten games. He should get enough opportunities to make it happen again.

Cooper Kupp over 57.5 receiving yards: Kupp has exceeded that mark five times this season. Four of those have been on the road. On the road, Kupp is averaging 6.6 catches, 10.6 targets, and 75 yards. In Week 9 at Miami, Kupp had 11 catches for 110 yards and was targeted 20 times.

Darrell Henderson over 31.5 rushing yards: Here is another good prop bet based on road success. Henderson has topped this mark in each of the Rams’ road games, and 368 of his 486 rushing yards this season have come in those five road games.

The Bucs are 7-1 against teams that are not the New Orleans Saints, so the Rams being named the Los Angeles Rams bodes well if you’re looking to back the home team on Monday night. It remains to be seen just how good Brady’s Bucs are, but this is a chance for them to show it.

If the Rams’ previous road games against half-decent or better opposition indicate a pattern to follow, avoiding the game spread and backing the Bucs in the first half and the Rams in the second half is the way to go.

Both teams have had more games with 48 or fewer points–six of 10 for the Bucs, seven of nine for the Rams–which makes under 48 the choice here.