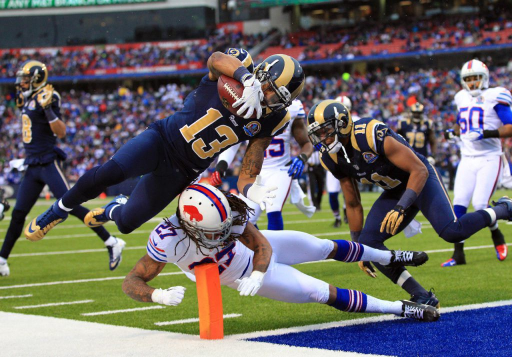 While a lot of attention will be paid to Monday night’s game between Kansas City and Baltimore, Sunday’s game between the Los Angeles Rams and Buffalo Bills is also a match-up of undefeated teams.

With wins over the Cowboys and Eagles, the Rams’ schedule has been more difficult, but the Bills have looked good in wins over the Jets and Dolphins. Barring a rare tie, one of these teams will be riding high at 3-0 following Sunday’s game.

Kickoff is set for 1 p.m. ET at Bills Stadium in Orchard Park. N.Y.

The Rams opened as small favorites for last week’s game against Philadelphia, but a lot of money got wagered on the Eagles. That led to the Eagles closing as 1.5-point favorites, but it turns out the opening line was the right side after all.

Los Angeles led 21-3 early in the second quarter and then cruised in the fourth quarter to a 37-19 win.

Though they trailed Miami 20-17 with 10 minutes remaining last week, the favored Bills scored 10 points in less than three minutes and were in a position to cover the closing 5.5-point spread. The Dolphins ruined the day for Bills bettors by scoring a touchdown in the final minute for a final score of 31-28.

Buffalo opened as 3-point favorites on FanDuel and DraftKings, and Rams money quickly moved the spread off of the key number and down to 2.5.

As of Friday afternoon, FanDuel and DraftKings both had Buffalo favored by 1.5 points.

The total has seen a significant increase on both websites. They each opened the over/under at 44.5 points on Sunday, but as of Friday afternoon, it rested on 46.5 at both books.

It is not wise to make betting decisions based solely on trends, and this match-up is a perfect example of that. Simply put, there are too many conflicting numbers to trust any of them with certainty.

Rams QB Jared Goff’s passing touchdown total at DraftKings is 1.5 with the over juiced to -143. It’s a steeper price to pay than normal, but this is a good spot to make that bet. Goff has always had the ability to light up the scoreboard, and the Bills have yielded three touchdown passes this season. Goff threw three last week in the win over Philadelphia.

Buffalo WR Stefon Diggs’s receiving yardage total at DraftKings is listed at 62.5. Taking the over seems like a strong bet for a player who has hit the ground running with his new team. He has eight receptions in each of his first two games and has 86 yards and 153 yards.

The Bills will be without two key offensive players and one backup defensive player. Head coach Sean McDermott said Friday morning that rookie RB Zack Moss is out with a toe injury. That paves the way for starter Devin Singletary to have a heavier workload. McDermott also ruled out tight end Dawson Knox (concussion) and LB Del’Shawn Phillips (quad).

Wide receivers John Brown and Cole Beasley are expected to play, as are DT Ed Oliver and CB Tre’Davious White.

The Rams will play without starting RB Cam Akers, who suffered a rib injury early in last week’s game and did not practice this week. That leaves Malcolm Brown and Darrell Henderson to share the carries against Buffalo.

This line keeps dropping for a reason. The Bills have had a nice start, and the offense looks like it will be above average with QB Josh Allen’s passing game taking a step in the right direction. Buffalo has played the weaker competition, however, and the defense gave up more than 400 yards to the Dolphins last week. If Edmunds and Milano don’t play, that defense will be down two important players.

The Rams, on the other hand, beat the Cowboys and Eagles despite being underdogs in both games. They have the top offense and defense the Bills will have faced so far.

We recommend on a play on the Rams money line.