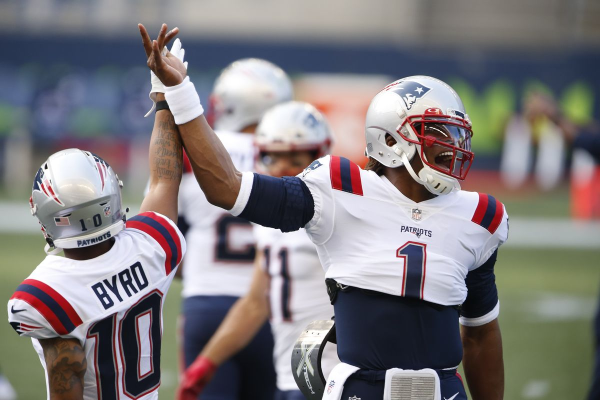 The New England Patriots and Las Vegas Raiders enter Sunday’s clash each with a pair of performances under their belts that show they are up to the task against strong competition.

With QB Derek Carr bouncing back from some off-season questions, the Raiders (2-0) have scored 34 points in each of their first two games.

New England, on the other hand, has a new QB in Cam Newton. Newton has played well, and it appears the Patriots will be contenders just like they were throughout the Tom Brady era.

Kickoff is set for 1 p.m. ET at Gillette Stadium in Foxborough, Mass.

The Patriots fell two yards short of pulling off an upset as 4-point underdogs at Seattle last week. On the final play of the game, QB Cam Newton took the snap on the Seattle 1-yard line but was tackled for a 1-yard loss to give the homesteading Seahawks a 35-30 victory.

The Raiders scored early in the second half and never trailed after halftime en route to a 34-24 home win over the New Orleans Saints, who closed as 4-point favorites.

The team-specific trends favor Las Vegas, but the head-to-head trends are conflicted. It should be noted that the teams have not met since 2017 and that they have only played one another every three years since 2002 for five total meetings.

On the other hand, the Raiders have covered in four consecutive games, and they are 4-1 ATS in their last five games following an ATS win. Las Vegas is 5-2 ATS in its last seven games as an underdog.

The road team in this series has covered the spread in the last four meetings, but the Raiders are 1-4 ATS in the series’ last five games.

The Patriots’ defense got flattened last week in Seattle, and you can be sure head coach Bill Belichick has spent much of practice this week correcting everything that went wrong. New England’s defense is one of the elite units and it should get a boost in returning to its home field.

For that reason, it is worth a look at betting under on Raiders QB Derek Carr’s passing yardage total of 244.5 at DraftKings. Carr completed 73% of his passes for 239 yards against Carolina’s lackluster defense in week 1. Without Ruggs available as a speed option at wide receiver, the Raiders lack their best downfield threat.

Las Vegas did get some good news on Friday when starting RB Josh Jacobs (hip) and TE Darren Waller (knee) returned to practice. They are listed as questionable on the injury report but are expected to play.

Patriots center David Andrews had surgery to repair a broken bone in his hand, and he will try to snap the ball with his other hand while he recovers. He is questionable for Sunday.

The Raiders have been good, but have they still have a few steps to take before they reach the same level as the Patriots.

New England no longer employs Tom Brady, but Cam Newton has proven to be fit enough to lead the team to victories. Last week was not a win or a cover, but the fact that the Patriots’ offense was good enough to get within two yards of beating superstar Seattle QB Russell Wilson on his home field speaks volumes about that unit’s capability.

The Patriots will get back on track in a big way Sunday. We recommend a play on the Patriots -5.5 and anything up to -6.5.