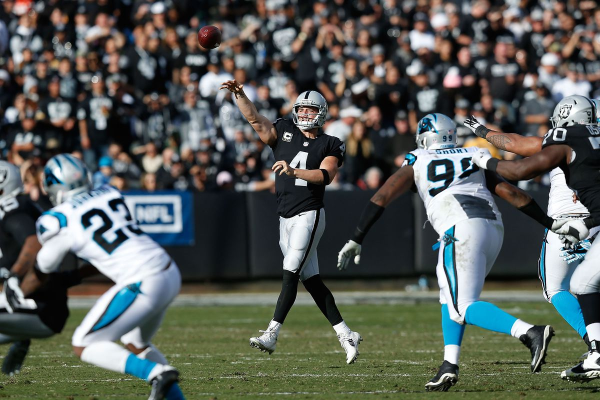 The Las Vegas Raiders will play their first game under their new city’s banner,while the Carolina Panthers begin the post-Cam Newton era.

Matt Rhule takes over as the new head coach in Carolina, and Teddy Bridgewater will debut as the new starting quarterback for the Panthers. Rhule has never been a head coach at the pro level, so it will be interesting to see what style and approach he develops after spending the last seven years in college at Temple and Baylor. On the opposite sideline, the Raiders have the combination of Derek Carr and Jon Gruden, who improved the offense last year while still in Oakland. That said, Carr is in a “prove it” type year as he has failed to take the Raiders over the hump in his six years with the team.

The focus of the game will be on the starting running backs on both sides. Christian McCaffrey has been the undisputed number 1 pick in fantasy drafts across the country this year, and he comes in with a line of -250 to score in the game. McCaffrey is coming off an incredible season in which he surpassed 1000 yards both rushing and receiving. He scored 19 touchdowns last year as well. Despite the huge numbers, McCaffrey did not score in 5 of the 16 games he played last year, so the -250 number seems like a high cost.

On the Raiders side, second year man Josh Jacobs should be primed for a huge year. He went for over 1100 yards last year as a rookie. His line to score is -182, which is a little more enticing but still might be a bad wager. Jacobs scored 7 times last year, but had 3 games where he scored twice. So doing a little very basic math, he only scored in 4 of 16 games last year. Gruden likes to throw the ball in the red zone, so you may want to look at options like Darren Waller (+145) or rookie wide receiver Bryan Edwards (+275). First round draft pick Henry Ruggs gets a lot of the publicity, and with good reason, but Edwards has been eye popping at camp and there are high hopes. He’s also much bigger than Ruggs, making him a nice red zone target.

If both teams are planning on moving the ball on the ground, let’s take a look at how the defenses handled the rush last year, as that can give us some clues on betting the over/under. The Raiders were solid against the rush last year, ranking 8th in the league allowing 98.1 yards per game. That said, Rhule will find creative ways to get McCaffrey involved. He’s an offensive mind who made his name by finding ways to get quick players in space in college.

On the other side of the ball, Carolina was awful against the run last year, ranking 29th in the league. They came into a week 8 meeting with the 49ers last year at 4-2, but gave up 232 yards rushing en route to a 51-13 crushing loss. Their season spiralled after that, as they only won one more game the rest of the way. This is a good matchup for Jacobs.

The matchup advantages for the Raiders combined with the powerful offensive minds calling plays in Gruden and Rhule make me think the over 47.5 is the play here. There is also the possibility that offenses may be ahead of defenses early in the year because no one has been tackling in preseason games or practices. I think a good number of points will be scored in this one.

For traditional spread players, the Raiders at -3 would be my pick. In pro sports, continuity matters and the Carr/Gruden pairing now has a year under its belt. Carr does have new receivers he’ll be getting to know, but the presence of last year’s breakout security blanket in Waller and the consistency of Jacobs out of the backfield will be hard for the Panthers to stop. On the other side, it’s all new. Rhule will be coaching his first game, and Bridgewater is in new surroundings. Bridgewater also has just 6 NFL starts in the last 3 seasons after dealing with his devastating injury with the Vikings in 2016.

Other prop bets you can explore include the Raiders first half over/under, which is 12.5 at -122. Again, I like the the Raiders to start the game faster than the Panthers because of the familiarity Carr and Gruden now have with one another. You can also bet the Raiders total of 24.5 at a relatively low price of -103.