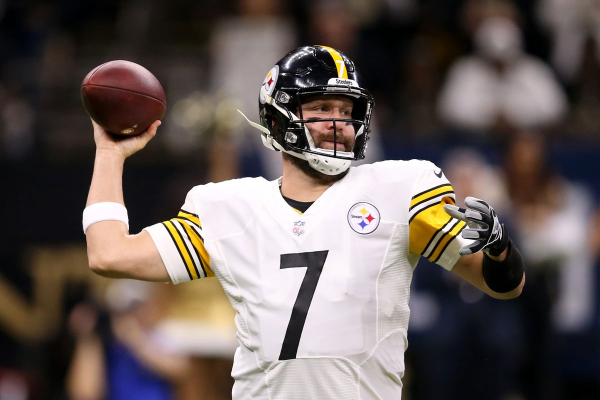 With a slew of games scheduled for Sunday, it is one of the first games of the slate that could be one of the most intriguing. Sunday, at noon, features a battle of two undefeated AFC teams as the Pittsburgh Steelers (5-0) take on the Tennessee Titans (5-0). Tennessee will be playing host for this one at Nissan Stadium.

Last week, the Steelers were able to dismantle the Cleveland Browns, 38-7. In the victory, quarterback Ben Roethlisberger threw for 162 yards and a touchdown. On the ground, James Conner, Benny Snell, and Chase Claypool all had rushing touchdowns. The defense also held a top rushing attack in Cleveland to just 75 yards on the ground.

It took overtime to do it, but the Titans managed to stay undefeated by beating the Texans 42-36. Ryan Tannehill threw for 366 yards and four touchdowns. The star of the game was Derrick Henry, though.

He rushed for 212 yards and two touchdowns on just 22 carries (9.6 yards per carry). He also had two receptions for 52 yards.

According to Fanduel, the Titans come into this one as the favorites playing at home. They sit at -122 on the moneyline to win while the Steelers are +104. The spread features the Steelers +1.5, and the over/under for total points is 50.5.

On the defensive side, it is the Steelers who hold the advantage. They rank 3rd in points allowed at 18.8 points per game. The Titans come in 15th, allowing an average of 25.2 points per game.

After struggling last season while having to sit on the sidelines with an injury, Roethlisberger is back under center and is looking to keep the Steelers undefeated in Week 7. On the season, Roethlisberger has thrown for 1,178 yards, 11 touchdowns, and just one interception while being sacked just eight times.

While JuJu Smith-Schuster leads the team in receptions with 23, rookie Claypool has stolen the show amongst wide receivers. To date, he has 17 receptions for 335 yards and four touchdowns. Between Smith-Schuster, Claypool, Eric Ebron, James Washington, and running back Conner, Roethlisberger has a plethora of options at his disposal.

Despite struggling earlier in the season with COVID-19 issues, the Titans come into this one still unbeaten and confident. They will try to use that confidence to take down the surging Steelers and defend their home turf.

Leading the way under center is Tannehill. He has started the season red hot as he has thrown for 1,370 yards, 13 touchdowns, and just two interceptions. He has also been sacked only five times.

The star of the show on offense, though, is Henry. On the season, Henry has rushed 123 times for 588 yards and six touchdowns. He also has eight receptions for 84 yards.

While the offense has been solid, the defense has left something to be desired. To this point, they have struggled to get consistent pressure on the quarterback as Jeffery Simmons leads the team in sacks with just two. In the secondary, Malcolm Butler leads the team with two interceptions.

It would not shock me if this one went either way. The Steelers showed last week that they can shut down a running game, but it is a whole new beast with Henry in the backfield. In a game that could go either way, I will take the points, which means taking the Steelers at +1.5.

One area that I do really like is the over in this one. The Titans have scored over 30 points in four straight games, and the Steelers have scored 26 or more in every game this season. With an over/under at 50.5, I feel confident this one hits that easily.