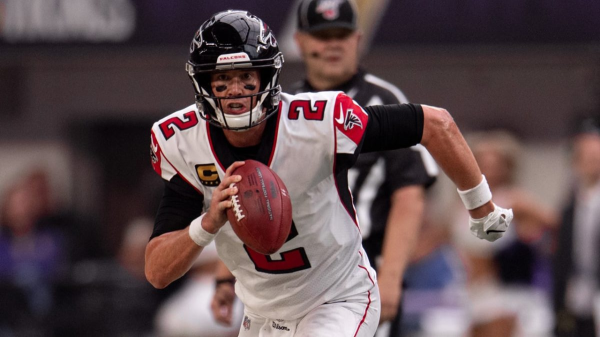 Week 2 of the NFL season has kicked off, with the weekend games wrapping up in Atlanta. On Sunday night, Matt Ryan and the Falcons host Carson Wentz and the Eagles in a rematch of last season’s opening-night game. Philadelphia eked out the win last year, but Atlanta will surely be looking for revenge.

After starting the week as just a one-point favorite, the Eagles are now entering the weekend as a two-point favorite on the road. Here is what you need to know for Sunday night’s matchup, including a prediction to win.

Philadelphia spent much of the offseason being considered one of the bonafide Super Bowl contenders, which is what made their 20-7 deficit at halftime to the Redskins last week so surprising. However, Wentz rallied the offense to score 25 unanswered points, pulling out the 32-27 victory at home.

The Eagles should once again rely on their three-man running back committee. Jordan Howard, Miles Sanders, and Darren Sproles combined for 116 yards on 26 carries against Washington to help Philadelphia erase their 17-point deficit. Now, this successful backfield will play a Falcons team that just allowed 172 yards on the ground to Minnesota. Coach Doug Pederson will likely continue to rotate his backs and play the matchups as needed.

Last week, Philadelphia doesn’t pull out the win without DeSean Jackson. The veteran receiver reunited with the Eagles in the offseason and made his presence known in his first game back, catching two 50-yard touchdowns as part of his eight catches for 154 yards. Jackson gives the Eagles a huge deep threat and will require Atlanta to give him extra attention, opening things up for Zach Ertz and Alshon Jeffery.

Earlier this week, Philadelphia lost Malik Jackson to a season-ending injury. It’s a blow, but the Eagles still have a very good defensive line led by Pro Bowler Fletcher Cox. They’ll be tasked with beating Atlanta’s offensive line, one that lost first-round pick Chris Lindstrom to injury last week and is now using a rotation at right tackle.

Last week in Minneapolis, the Falcons were gashed by the Vikings all game long, losing 28-12. With Minnesota’s run game working as well as it did, Kirk Cousins only attempted 10 passes for the entire game. It wasn’t all doom and gloom for Atlanta, however, as Matt Ryan threw for over 300 yards with two touchdowns.

Ryan will once again be the focal point of the offense on Sunday. He’ll match up against a Philadelphia defense that was 30th against the pass last season and was torched for over 380 yards by Case Keenum last week. Keenum was only sacked once all game, having ample time to exploit a mediocre secondary. If Ryan has the time Keenum did in the pocket, he should be able to put some points on the board.

Of course, it helps a quarterback when you have a loaded group of receivers like Atlanta does, led by Julio Jones. The All-Pro, who inked a three-year, $65 million extension a day before the season opener, was held in check by Minnesota, grabbing six catches for 31 yards and a touchdown in the final minutes of action.

However, Jones will have more good games than not, as evidenced by last year’s game against the Eagles where he had 10 catches for 169 yards. Jones is a threat every time he’s on the field.

Lastly for the Falcons, the fact this game is in Atlanta is a nice advantage. Although the Eagles are 3-0 in their last three games against the Falcons, all of those matchups occurred in Philadelphia. In the last four meetings in Atlanta, Philly is 1-3. As one of the better home teams in the NFL over the last decade, the Falcons might get a boost from playing in front of their home fans.

As mentioned earlier, Philadelphia is a two-point favorite on the road. However, the Eagles are 4-6 as road favorites against the spread since 2016, when the Wentz and Pederson era began. That mark is only the 26th-best cover percentage in the league during that time.

Meanwhile, since Ryan became the starting QB in 2008, Atlanta is 11-5 against the spread as home underdogs. The 69 percent rate they cover is the third-best in the NFL during that time.

This has the potential to be a trap game for the Eagles, where a slow start similar to the one they had against Washington would likely result in a loss. However, the Eagles’ ability to have a balanced offense, as well as the advantage they have on the defensive line, should be enough to leave Atlanta with a victory. I’ll pick the Eagles to win 34-28.