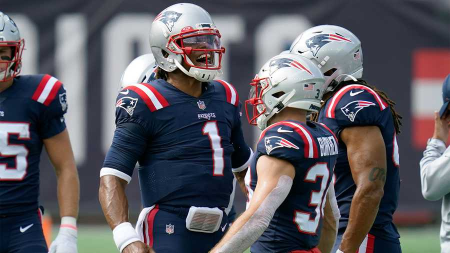 The New England Patriots head to Kansas City to play Patrick Mahomes and the Chiefs in what should be an interesting Week 4 matchup.

Usually you would expect the New England Patriots to be favored headed into Week 4 facing the Kansas City Chiefs.

But things have changed. Tom Brady is no longer on the team and there is a sense of change in New England.

The Chiefs are led by Patrick Mahomes who is having another great season. He has started 2020 off with a bang.

Mahomes has thrown for nearly 900 yards, and has thrown nine touchdowns while throwing no interceptions.

Also Mahomes hasn’t run a lot this season. He only has 10 carries for 80 yards and a touchdown.

Mahomes is one of the best players in the NFL. It will be very tough for New England’s defense to stop him.

The Patriots are led by Cam Newton who is having a redeeming season for New England. He is showing why he is a former NFL MVP.

Newton has thrown for 714 yards, two touchdowns and two interceptions. He has also run for 149 yards and four touchdowns.

The Chiefs are favored by 7 points according to DraftKings Sportsbook. That is quite the margin for a New England team with the former Defensive Player of the Year. Stephon Gilmore has struggled but he is still one of the best corners in the NFL. He has a chance to bounce back against the Chiefs.

The smart move is to take New England to cover the spread. It’s very likely that the Patriots keep things close and lose by three to six points. It’s hard to see New England losing by a whole lot. Newton has proven that he can lead this team against tough opponents such as the Seattle Seahawks in Week 2.

If you are confident that the game will be close there is some money to be made betting on this NFL game. A bet of Kansas City winning by 1-6 points will get odds of +350.

Now it would appear that this game is destined to be a shootout with Newton and Mahomes leading the way but if New England wants to win that won’t be the case. The Patriots will try and slow things down to try and keep Mahomes on the sidelines. The smart move when it comes to the point total is betting the under of 53.

This is also the reason that bettors should be looking at betting Newton to score. Odds are currently at +125. If you want to take a risk, a dark horse would be betting J.J. Taylor to score.

Taylor had a breakout performance in Week 3 with 11 carries for 43 yards. He was one of the best running backs on the field. It wouldn’t be surprising to see the Patriots use Taylor in the endzone. He should have earned the coaching staff’s trust with his performance last week.

The Patriots have struggled when it comes to defending the run. They have allowed over a hundred yards rushing twice this season. With Clyde Edwards-Helaire having his rushing yard total set at 72.5 it would make sense to take the over. Clyde should run all over the Patriots.

Who will score first?

But bettors also have a lot of chances to get a decent return on Sunday afternoon. There’s a variety of bets that could increase the size of your bankroll. No matter who you have money on though the matchup between the Patriots and Chiefs will be fun to watch.