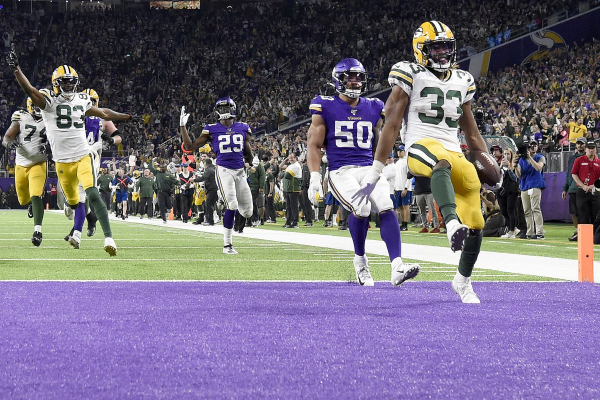 With just one regular-season game left, the Green Bay Packers are the 2019 NFC North champs after taking down the Minnesota Vikings 23-10 on Monday Night Football. Now, Green Bay turns its focus to securing the highest possible seed as it prepares for another playoff run.

A rivalry game in Minnesota had the Vikings aiming to steal the division title away for themselves, but the Packers were too much to handle.

Yet it wasn’t a heroic performance from Aaron Rodgers that got the job done for Green Bay. Instead, the combination of suffocating defense and a bludgeoning run game wore Minnesota down until it couldn’t hang on any longer.

Offensively, running back Aaron Jones led the way with two second-half touchdowns and 154 total yards on the ground. Za’Darius Smith spearheaded the defensive effort with five tackles for loss.

Neither quarterback was particularly effective. While Kirk Cousins threw for only 122 yards with one TD and one pick, this marked the first time in 18 games that Rodgers threw an interception without a touchdown pass.

A Packers team that took a 10-9 deficit into the half held the Vikings scoreless in the second half while putting up 14 points of their own to improve to 12-3 and claim the NFC North crown.

To put it simply, the NFC is loaded at the top. Three teams currently sit at 12-3 – San Francisco, Green Bay, and New Orleans – followed by 11-4 Seattle and 10-5 Minnesota. That means there’s plenty of the playoff puzzle that still needs to be put together in Week 17.

With the win over the Vikings on Monday night, the Packers kept their chances of earning the top overall seed and all its benefits very much alive.

Depending on how the final week of the regular season shakes out, Green Bay could end up as the first, second, or third seed in the NFC.

So, how could Green Bay wind up with each of the three?

After losing to the 49ers in Week 12, the Packers lose the head-to-head tiebreaker with another 12-3 team. So, Green Bay would need a win over Detroit in the final week of the season AND have San Francisco lose to Seattle for Rodgers and company to take the top seed.

The Packers would earn the second seed if both Green Bay and San Francisco win in Week 17, or if all three teams currently sitting at 12-3 lose in the final week of the regular season.

Finally, the Packers would be the third seed in the NFC if Green Bay loses to Detroit and New Orleans defeats Carolina. In this case, the result of the San Francisco-Seattle game wouldn’t matter for the Packers’ playoff positioning.

Favorites in the NFC

With its win over Minnesota, Green Bay showed a style of football that can power a team through the playoffs. And although Rodgers hasn’t been elite for stretches of the season, there aren’t many quarterbacks you’d rather have leading your playoff run.

So, are the Packers now the favorites to represent the NFC in the Super Bowl?

According to the odds, not quite. In fact, of the three NFC teams currently sitting at 12-3, Green Bay has the worst odds of winning the conference at +390.

Leading the list of NFC favorites is San Francisco at +180, followed by New Orleans and its +220 odds.

However, the Packers can be happy to be a part of that trio at the top of the list of favorites, as there’s a huge drop between third and fourth. Seattle owns the fourth-best odds of winning the conference at +900.

So, while the Packers aren’t the favorite, they are one of the favorites in what appears to be a three-team race, according to the odds.