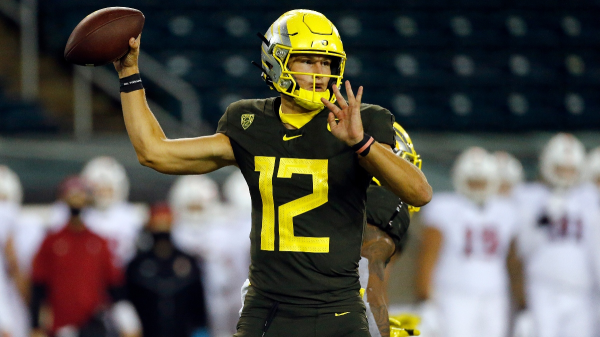 Can the Oregon Ducks Maintain their Winning Streak?

Since the start of this season, the Oregon Ducks have had a good run. They are currently ranked No. 9 in the nation. However, of the 3 games, they have been in, only the last one against UCLA had been tight, and they had narrowly escaped with a 38-35 win. The games against Stanford, which was a 35-14 win, and against Washington State, a 43-29 win, had been games they won by a landslide.

Oregon quarterback Tyler Shough posted 334 yards in the victory over UCLA with three touchdowns on 19 of 30 passing. For 40 yards, Travis Dye managed 10 carries, and Devon Williams led the receivers from six grabs to 123 yards. The Ducks had a 17-point favorite in its game against UCLA, but the defense was not able to earn enough stops to get some separation. The Ducks have scored 38.7 points per game and have earned 499.7 total yards of offense per game as well. They also allowed 26.0 points per game and 432.0 total yards per contest to its opposition.

The team has an effective offense, which has averaged about 500 yards total offense per game this season. They are excellent at both running the ball and throwing it. Thus it would not be easy to create a game plan against them. However, they have problems slowing down the ground game of opposing teams as they have given up a total of 206.7 yards per game, six scores, and 5.2 yards on the ground.

So, while they seem to be a shoo-in for an easy win against the Beavers, they would need to work on their defense because anything less would hurt their chances of a New Year’s Six bowl or an unlikely college football playoff spot, and the UCLA game showed several flaws in their defense.

Would the Beavers get a chance to shine?

On Saturday, the Beavers bagged their first win of the season when they got a 31-27 win over the Golden Bears. This moved them up on a 1-2 record overall, and since they only play conference games, they are sitting on a 1-2 record in the Pac12.

Nationally, the Beavers are 105 in passing offense and have 189.7 yards per game through the air. They are tied at 63rd in rushing offense, and they average 164.7 yards per contest. In scoring offense, they currently rank at 79th amongst the 127 FBS teams that have played this season as they have 26.7 points per contest. In scoring defense, they rank 68th, and this season they have allowed an average of 30.7 points per game.