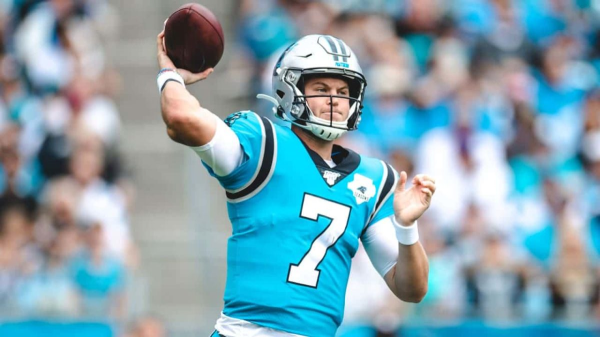 Sunday afternoon features a matchup of the NFC South versus the NFC West as the Carolina Panthers (4-2) travel to Levi’s Stadium to take on the San Francisco 49ers (6-0). The Panthers have been rolling despite not having starting quarterback Cam Newton. Kyle Allen has taken his place and has this team trending the right way, going 4-0 as a starter.

The 49ers have just dominated teams on the defensive side and are looking to keep their unbeaten streak going Sunday afternoon at home. Kickoff for this one is scheduled for 4:05 pm ET.

There was a lot of doom and gloom amongst Panthers’ fans after the team dropped the first two games of the season to the Rams and Buccaneers, and that was only intensified with the loss of Newton. Despite that, Allen has gotten the team rolling, and they have won four in a row. Most recently, the team got some retribution against the Tampa Bay Buccaneers as they beat them on Oct. 13, 37-26. Now coming off of a bye week, the Panthers are hoping the extra rest will help them take down the unbeaten 49ers.

The San Francisco defense has been quite impressive to this point. In fact, in the last three games, the 49ers have allowed a combined 10 points to opponents, including a 9-0 win over the Redskins last week. While the offense has lagged behind a little, they don’t have to put up crooked numbers in order to win with the job the defense is doing. Still, quarterback Jimmy Garoppolo and the rest of the offensive unit will hope to take a little bit of the pressure off of the defense by doing their part on Sunday.

The San Francisco 49ers come into this as 5.5-point favorites playing at home. The over/under for points scored is set at 42.

On the offensive side, it is the Carolina Panthers who hold the advantage thus far this season. They currently rank fifth in the league, averaging 27.7 points per game (30.3 on the road). The 49ers come in 11th overall, averaging 26 points per game (27.5 points at home).

As the Panthers look to keep up with the New Orleans Saints in the NFC South, they are having to do it without Newton. While Newton is certainly talented, the offense has actually seemed to click a bit better since Allen has taken over. Thus far, Allen is 80 for 122 for 901 yards, seven touchdowns and no interceptions. He has been sacked 10 times but consistently gives the Panthers’ offense a chance.

The key to this offense, though, has been Christian McCaffrey. On the season, McCaffrey has 127 rushes for 618 yards and a whopping seven touchdowns. If that wasn’t enough, he also leads the team with 35 receptions for 305 yards and another two touchdowns. DJ Moore has also done well on the receiving end, having 33 catches for 425 yards and a touchdown.

While the San Francisco 49ers are a great team, their defense is just flat out dominant. The leaders on this defense include Fred Warner (33 tackles), Dee Ford (4.5 sacks), and both Richard Sherman and K’Waun Williams with two interceptions apiece.

On the offensive side, Garoppolo leads the team under center. On the season, he is 114 for 167 for 1,314 yards, seven touchdowns, six interceptions and has been sacked eight times. These are far from dominant numbers, but he has managed the games enough to help his defense carry them to wins. Still, he and the rest of the offense are going to have to step up at some point if they hope to maintain their unbeaten record.

On the ground, Matt Breida has led the way for the 49ers with 73 carries for 411 yards and a touchdown. Breida had to leave the game momentarily last week for concussion concerns, so it will be interesting to see how he does this week. Regardless, the offense has to start helping the defense out.

San Francisco’s defense has been beyond menacing to opposing offenses this season, and, although they have a tough challenge in containing McCaffrey, I still think they will get the job done. Still, this one becomes more about the offense being able to pull away enough as opposed to the defense holding the Panthers down.

While I do think that the 49ers will do enough on both sides of the ball to win this game, I think there is a lot of value in the Panthers to keep this one close. Allen has been impressive, and they have just enough to challenge the 49ers’ offense. I wouldn’t blame you if you took the unbeaten 49ers, but for my money, I like Carolina and the 5.5 points in this one.