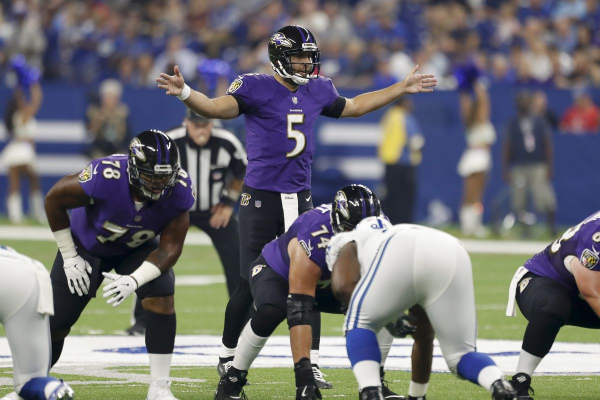 The undefeated 2-0 Denver Broncos are traveling to Baltimore to take on the Ravens on Sunday. The Ravens stand at 1-1 with a dominating win over the Bills and a loss to the Bengals 34-23. The Broncos have played two close games and have beaten the Raiders and Seahawks, both in Denver, by a combined four points. The Broncos first road game will be a test to see if they are for real this year whereas the Ravens need a bounce-back win at home against the Broncos. The Ravens are favored in this one by 5.5 points.

Denver Looking to Get Back on Track

The Broncos took down the Seahawks 27-24 in week one and then survived on a last-second field goal in week two against the Raiders. The Broncos have been moving the ball very well accumulating 865 yards in two games. Case Keenum has thrown for 551 yards and three touchdowns along with four interceptions. The Broncos have run the ball for 314 yards this year which is ranked second in the NFL. Emmanuel Sanders has caught 14 passes for 231 yards and a touchdown.

This year the Broncos are living on the big play as they have 11 pass plays that have gone for more than 21 yards whereas last year they only had four through the first two games. The defense for the Broncos has been pretty solid as usual with Von Miller carrying a lot of that load. Through the first two games, Miller has four sacks and leads the NFL. The Broncos are in the top half of the NFL in yards allowed with an average of 339.5 per game. Their run defense is spectacular only allowing 156 yards which ranks 6thin the NFL.

The Ravens dismantled the Bills 47-3 in their opener and then fell to the Bengals 34-23 on Thursday night football. They are a passing team right now with quarterback Joe Flacco throwing for 612 yards and five touchdowns through the first two weeks. They are struggling to get the run game going only gaining 183 yards on the ground this year which is 23rdin the NFL.

They are scoring a ton of points though as their 35 points a game average ranks 3rdin the NFL. The defense has been solid at stopping opposing teams from scoring only giving up 18.5 points a game which is tied for sixth in the NFL. The Ravens have gotten 54 first downs this year only to trail the Steelers with 58.

The Ravens are also very good at converting third downs with a conversion rate of 43.3%. The defense struggles to force turnovers but they are so good against the pass, they don’t really need to create that many turnovers. Their defense ranks second in the league according to yards given up this year.

This should be a battle with both team’s strengths opposing each other. The Ravens are going to try and throw the ball and the Broncos defense has been good so far this year. The Ravens don’t run the ball that much and the Broncos stop it very well, so look for this to be a one-dimensional game for the Ravens.

The Broncos, on the other hand, are going to look to get the run game going early since the Ravens are so good stopping the pass. Look for this game to be a low scoring defensive battle where the winning team will get a lucky bounce in the second half. Look for a big defensive play or stop to spark a win. I would take the Broncos to cover at +5.5 points.