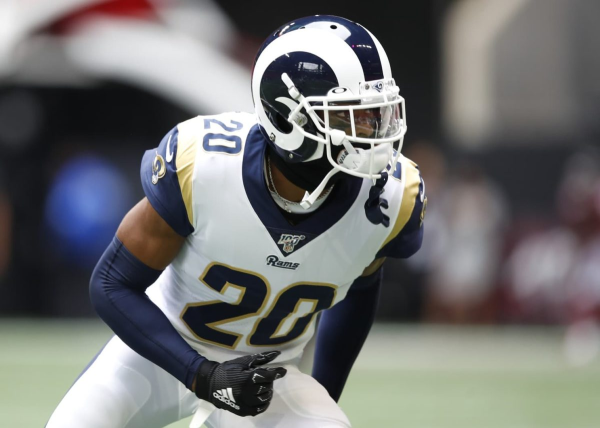 As the 2019 NFL trade deadline came and went, plenty of noise and rumors turned into few done deals with the midpoint of the season upon us. Yet while just one trade was executed on deadline day, eight deals were made over the past week, and several more kept us busy throughout the first half of the season.

As always, big-time names were flying around as whispers of availability grew louder, but not many actually changed teams. For example, the Jets were rumored to be shopping safety Jamal Adams to the Cowboys, but nothing was ever finalized.

However, we didn’t leave deadline day empty-handed thanks to the Dolphins and Rams. In what’s considered to be a salary dump, the Rams sent cornerback Aqib Talib and a fifth-round draft pick to Miami for a future pick.

So, as we focus on who went where over the past week or so, let’s see which teams improved.

Let’s start with the Rams, who were the most active team in the lead-up to the trade deadline. First, Los Angeles sent Marcus Peters to the Ravens for linebacker Kenny Young before acquiring star cornerback Jalen Ramsey from the Jaguars for a pair of first-round picks.

Then as the deadline approached, Los Angeles was able to unload the injured Talib, which should pave the way for the team to sign Ramsey to a long-term deal.

In the end, the Rams upgraded their defense and made it work by the numbers while cutting their Super Bowl odds down from 30-1 all the way to 18-1 when the Ramsey acquisition went down.

Next up is Baltimore, which was the beneficiary of Los Angeles needing to unload Peters in order to make the Ramsey deal make sense. With the acquisition of Peters, the Ravens upgraded their defensive backfield as they go in search of postseason success.

It’s hard to talk about 2019 NFL trades without mentioning the Miami Dolphins, who’ve been active all season long.

To review, the Dolphins shipped out tackle Laremy Tunsil, receiver Kenny Stills, defensive back Minkah Fitzpatrick, and now running back Kenyan Drake, all for draft capital. Seeing as how Miami wasn’t going to compete for anything significant this year, the Dolphins come out big winners heading into the 2020 draft, in which they now have 14 picks.

The Patriots have had a revolving door at the receiver position so far this year and made a deadline deal for Mohamed Sanu to help solidify the position. The biggest winner in the deal is probably Sanu himself, who went from 1-7 Atlanta to 8-0 New England.

The 49ers also recently added to the receiver position by going out and getting Emmanuel Sanders from the Broncos. Although San Francisco has been the most successful team in the NFC thus far, the offense has struggled to get big plays in the passing game, and Sanders will help.

While deadline day itself was a dud, there were plenty of significant trades in the lead-up to the deadline. So, let’s take a look at how the top teams now stack up according to the odds.

When the trade deadline finally passes, we get a much clearer view of the NFL as a whole. In addition to seeing what final rosters look like, we also have roughly half the season to inspect, and so do the oddsmakers.

With that newfound clarity, let’s take another look at the favorites to contend for the Lombardi Trophy.

Of the teams having made moves near the trade deadline, four are in the top 10 for odds to win the Super Bowl. Let’s begin with the Patriots, who made the Sanu deal, and are the favorites to win it all with +220 odds.

Joining them as one of the best teams in the AFC is Baltimore, which acquired Peters and currently owns the seventh-best odds of winning the Super Bowl at +1800.

The Ravens and their +1800 odds are tied with the Rams, who seem to have reinvigorated the team with the acquisition of Ramsey to upgrade the defense.

And the undefeated 49ers are even with the Packers at +800 after making the Sanders deal. Tied for the third-best odds in the NFL, San Francisco trails only New England and New Orleans (+500).