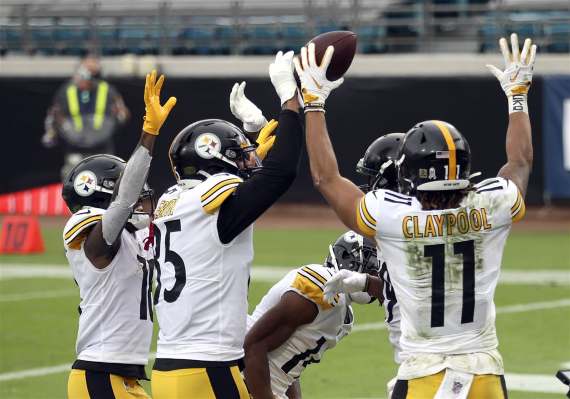 Week 11 of the NFL season featured several notable results and moments. There were a number of key matchups between teams in the playoff mix in the AFC and the NFC. The results of those showdowns have had an impact on how NFL futures betting odds from FanDuel Sportsbook look going into Week 12.

Only six more games stand between the Pittsburgh Steelers and a 16-0 regular season. There are some challenges to come, but Sunday was not much of one, as they handily dispatched Jacksonville 27-3. The 1-9 Jaguars actually led 3-0 after the first quarter, but the Steelers dominated from there to keep their quest for perfection intact.

Heading into their Thanksgiving night showdown with AFC North rival Baltimore, Pittsburgh is now only +700 to go 16-0. With home games against the Ravens and Colts and road games against the Bills and Browns, perfection will be a tall task.

The two tightest division races continue to be in the NFC East and NFC West.

In the NFC East, the Philadelphia Eagles appeared to clearly be the best of a bad bunch a few weeks ago. They still may be, but after consecutive road losses to the Giants and Browns, only their Week 3 tie against Cincinnati is the difference in the 3-6-1 Eagles holding the edge over a trio of 3-7 teams.

Odds To Win The NFC East

The biggest beneficiary of the Eagles’ inability to pull away could be the Cowboys. The Cowboys performed impressively in the clutch in a 31-28 win at Minnesota, putting in their best performance since the loss of Dak Prescott to deal a big blow to the Vikings’ playoff hopes. The Cowboys are now +210 to win the division heading into their Turkey Day visit from Washington and have the most favorable schedule of the bunch, by far.

Going into Week 11, there was a three-way tie atop the NFC West. Seattle moved out in front with a Thursday night triumph over Arizona, with the Los Angeles Rams joining them at 7-3 with a huge 27-24 Monday night win at Tampa Bay.

Odds To Win the NFC West

Week 12 sees the Cardinals and Seahawks go across the country to face New England and Philadelphia, respectively, while the Rams host the 49ers. Kyler Murray and the Cardinals lost ground with their loss in Seattle, but they still have two games against the Rams, who also have a trip to Seattle left.

Elsewhere, the Miami Dolphins squandered a chance to tie idle Buffalo atop the AFC East with a poor showing in a 20-13 loss at Denver. The 7-3 Bills are now -470 to win the division, while the 6-4 Dolphins sit at +370.

With Miami’s missed opportunity and Tampa tripping themselves up, the only other division race that is currently close is in the AFC South. Both of the co-leaders overcame double-digit deficits to pick up big overtime wins and move to 7-3. Tennessee trailed 21-10 at Baltimore before rallying for a 30-24 win over Lamar Jackson and the Ravens. Indianapolis trailed Green Bay 28-14 at home but stepped up on both sides of the ball in the second half in a 34-31 thriller.

Due to their Week 10 win in Nashville, the Colts are -160 to win the AFC South going into Sunday’s rematch with the Titans, who are +125 to take the title.

All odds in this article were provided by FanDuel and updated as of November 24 (2:00 pm ET).