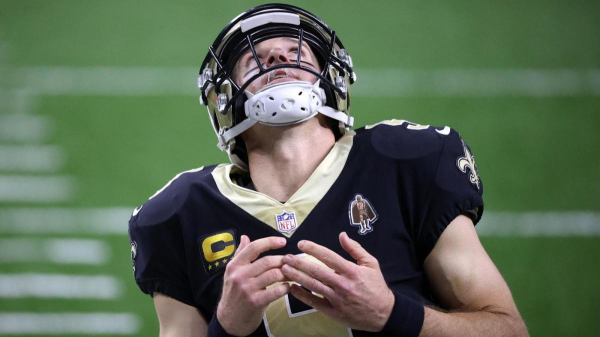 If the New Orleans Saints are to claim the NFC South and the NFC’s No. 1 seed for the postseason, they may have to do it without Drew Brees. After exiting Sunday’s game against San Francisco, Brees is slated to miss at least a few weeks with fractured ribs and a collapsed lung. It’s not certain how long he will be out, but for now, the reins have been handed to Jameis Winston (or Taysom Hill?).

Winston finished out the 27-13 win over the 49ers, which was the Saints’ sixth win in a row. At 7-2, New Orleans is ahead of 7-3 Tampa Bay atop the NFC South and shares the NFC’s best record with Green Bay. Does the injury news severely impact their latest NFL futures betting odds? It does not, at least for now.

Updated Odds to Win the NFC

There is reason for Saints fans and bettors to remain optimistic even if Brees is out for the remainder of the regular season. New Orleans already has their two games against Tom Brady and the Bucs out of the way. With wins in both games, the Saints own a tiebreaker advantage that could prove to be valuable.

Their schedule is also favorable. Of the Saints’ final seven games, four are on the road. But that quartet of games is against Atlanta, Denver, Philadelphia, and Carolina – teams with a combined record of 12-24-1. The only game against an opponent that currently has a winning record is a showdown with Kansas City in Week 15. If Brees heals well, he could very well be back for the matchup against the reigning champs.

If Winston can hold the fort well over the next few weeks, Sean Payton could consider keeping Brees sidelined longer so he can be fully healed for the playoffs. Brees may be at the back end of his career, but if he is fresh for the postseason, the Saints will be tough to top.

A Look at Other Divisional Odds

While the Saints are a strong favorite in the NFC South, how do things shape up in other divisional races?

The tightest race is in the NFC West, where the Cardinals, Rams, and Seahawks are all 6-3. Seattle has lost three of four after a 5-0 start but still have a slight edge in the latest odds to win the division. At +155, they are just ahead of the Rams, who are at +180 after their 23-16 win over the Seahawks. Kyler Murray and the Cardinals sit at +200 after a miraculous win over Buffalo.

Speaking of the 7-3 Bills, they are still favored to win the AFC East at -335 after their last-second loss. But Miami has won five straight to move to 6-3, with Tua Tagovailoa winning his first three NFL starts. At +300 to win the AFC East, now might be the best time to back the Dolphins with winnable games at Denver and at home against the Jets and Bengals over the next three weeks.

In the AFC South, the Indianapolis Colts are now favored after winning at Tennessee last Thursday. Both teams are now 6-3, but the Colts (-167) have a leg up on the Titans (+115) after an impressive victory.