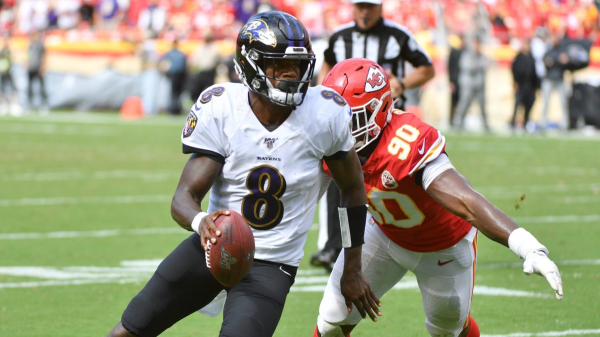 Week 5 of the NFL season provides a lot of low-total games for a slate of 12 and lacks a lot of clear and obvious options. That being said, this does not mean there aren’t spots to take advantage of. It simply means that the best plays on the slate may come from a different mold than other weeks.

At quarterback, we are without the free square that has been Patrick Mahomes for a combination of safety and upside, but we do still have Lamar Jackson, who has posted fantasy scores of 37, 34, 22, 26 in the first four weeks of the season. I think that Lamar is the best option at the top of the board because of his ability to score whether the Ravens are winning or losing.

If you want to save money, I like spending down on Andy Dalton in a game that I think could be full of points. The Cardinals and the Bengals are two of the worst teams in the NFL, and their defenses have struggled to play well for most of the year. The added benefit to using Dalton is that his receivers are all priced well for this matchup, making him a great stack candidate.

My favorite top-end running back on this slate is Ezekiel Elliott because of the usage that he saw in the Cowboys’ last game. Zeke saw way more snaps and targets than he did in the first three weeks, and I can feel comfortable that he is the bell cow back moving forward.

This season, the Packers have gotten gashed by running backs consistently because they run a lot of smaller packages on the defensive side of the ball. I expect Zeke to post a monster day here at relatively low ownership.

Aaron Jones is an elite option since we now know that Jamaal Williams will be out of this game with a concussion. Jones has been a fantasy darling for years, but he has lacked the touches on a consistent basis. This week, I expect Jones to see 70-plus percent of the work, making him one of the best plays on the slate.

Michael Thomas is simply too cheap on DraftKings, so he is my favorite WR1 over there. Thomas is without Drew Brees, but he has shown an ability to produce at an elite level without Brees, and I think that this game could quickly turn into a shootout if we see good Jameis Winston show up here for the Bucs.

If you want to dive into the cheap receivers, look no further than the Bengals vs. Cardinals game. These are two bad pass defenses taking on teams that want to throw a lot and have multiple injuries that should allow for high usage for cheap and potentially effective players.

I really like Auden Tate in this spot. Tate is a big receiver that has had a real role in the Arizona offense, even out of the slot, where the Cardinals have gotten destroyed all season. Tate has seen 10 and then six targets in his last two games, and now he looks to take over the clear WR2 spot in Cincinnati after they lost John Ross late last week.

My favorite tight end play on the week is Darren Waller because I think that his floor and ceiling are both elite for a tight end on a weekly basis. Last week, Waller had six catches for 50 yards in the first half before the Raiders took control of the game and strayed away from him in the second half.

Now, Waller gets the Bears defense as an underdog, and he should be relied upon heavily in the passing game to pick up easy yardage. I don’t expect anything to be easy for the Raiders’ offense this week, and I think that they will rely on Waller to gain chunk yardage on easy completions over the middle.