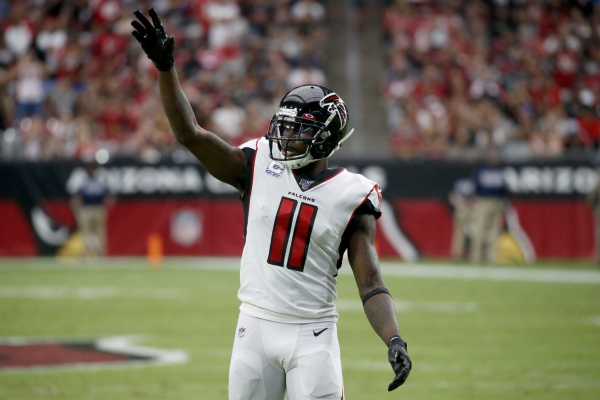 The NFL DFS slate this week lacks a lot of clear plays and game stacks, but that doesn’t mean that we can’t find good chalky or contrarian plays all over this slate. Overall, I think that this slate projects to be slightly lower scoring than average without a ton of obvious cheap value due to usage and injuries.

Russell Wilson and Deshaun Watson are the chalkiest quarterbacks on this slate at just above 10 percent ownership a piece. They are also the two most expensive quarterbacks on most sites. Overall, I prefer to stay away from these two in GPPs to leverage the field and go with some less safe options with much less ownership.

I expect Drew Brees to start on Sunday, and if he does, he is one of my favorite plays on the entire slate. I would expect his ownership to be really low coming back from injury, but I have no reason to believe that he would be hindered by his injury. The Saints have been solid with Teddy Bridgewater at the helm and do not need to play Brees at less than 100 percent.

If Matt Ryan is ruled out before the game, I will end up being overweight on Matt Schaub against the Seahawks secondary that does not scare me. Schaub isn’t great, but he is more than capable of being a distributor to elite talents like Calvin Ridley and Julio Jones.

Christian McCaffrey is one of the most polarizing plays on the slate because of his obvious talent vs. one of the best defenses in the NFL so far this year. With McCaffrey’s versatility, I believe that being even too overweight in this situation is the best way to attack it. McCaffrey should find the end one and continue to see a lot of short and high-percentage targets, even in a tough matchup.

If you want to save money, the chalk option is Ty Johnson with Kerryon Johnson out for the season. Ty saw most of the team’s snaps after Kerryon went out with injury last week. Ty Johnson only ran for 2.9 yards per carry, but he also saw four targets in just over half the snaps, which is clearly more than we would typically see from Kerryon in a similar role.

This target share is what gets me comfortable about eating the chalk with Johnson and rolling him vs. a bad defense. I expect Johnson to lead the Lions in snaps, carries, and touches in a game that I expect them to win.

My favorite receiver on the week is Julio Jones. Jones will not be highly-owned in this spot, and I think that this spot has nuclear potential, given the situation as a whole. The Falcons just lost Mohamed Sanu to a trade, and I expect this to give Jones a higher total market share of the offense. The Seahawks do not have an answer for Jones, and I would not be surprised to see him force-fed targets from a backup QB in a game where they are expected to trail.

DaeSean Hamilton is set up to be in a great spot at a really cheap salary all over the industry. Hamilton SHOULD be chalk, but I do not think that he will be, which means that I want to be significantly overweight.

Hamilton was directly tied to the lack of Emmanuel Sanders last year, and the Broncos are without Sanders in this game and moving forward after trading him this week. Last season, Hamilton saw seven, seven, six, and five receptions in his last four games that were without Sanders. I expect Hamilton to turn into the full-time slot/possession receiver moving forward.

I will continue to just play Darren Waller all over the place based on his usage and situation. The Raiders love short and easy passes, which are often correlated to tight ends like Waller.

Waller had seen poor touchdown variance until last week, and I expect this to continue to turn around. Waller is one of the safer receivers on the slate week in and week out, and I will continue to just ride him into the ground until his price is appropriate.