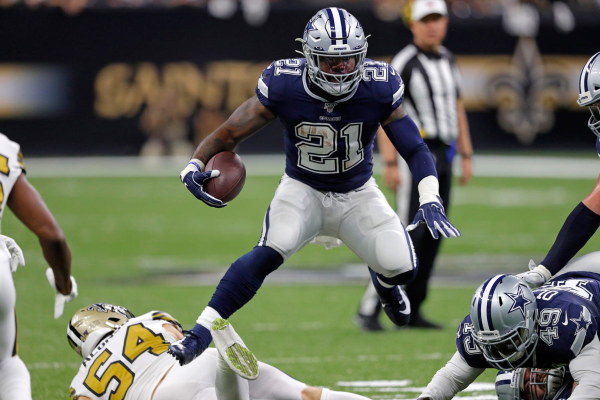 Week 6 of the NFL season provides a great slate of DFS. This slate is going to be very, very different based on certain news that does or does not come between now and Sunday morning, so be aware of the injuries leading into the games. Since this slate is so different, I want to break down some key decision points regarding the slate as a whole.

What Running Backs Should I Play?

The running back position is the most important on this slate leading into Sunday because there are multiple injuries to monitor that could completely change the slate. We’ll get into those in a bit, but first, let’s talk about the spend-up options that will be in play regardless.

Ezekiel Elliott is the highest-priced running back on most sites, and he gets a great matchup with a bad Jets defense. Last week, Zeke was set up for a huge game until the Packers jumped out to an early lead and never let the Cowboys dictate the pace of the game. This led to Zeke being used a TON in pass blocking, and it really limited his production.

In this matchup, I expect Zeke to feast against a struggling Jets’ linebacker group. I like Zeke, especially in tournaments this week.

Under Zeke, Leonard Fournette is my favorite cash-game option because he has bell-cow usage at a nice price. Fournette’s usage this season is really only rivaled by Christian McCaffrey through five weeks, and, although McCaffrey is clearly much better, usage trumps all at the running back position. Fournette is a fantastic play in a game that projects to stay close throughout.

There are plenty of decent mid-tier options this week, but I don’t think they will be necessary, depending on some of the injury news that we get moving forward. Most notably, Todd Gurley, Alvin Kamara, and David Johnson are all questionable or worse to play on Sunday.

Gurley currently seems like the least likely back to suit up this week of the three I listed, and this is a fantastic spot for Malcolm Brown at a dirt-cheap price across the injury. While the Rams have Darrell Henderson, I expect Brown to get the VAST majority of work here and be the top PPD option on the slate if everyone else is healthy.

Johnson seems likely to play after he told the media that he will be fine on Friday. If he does happen to sit out, I will play over 80 percent Chase Edmunds on every site as a workhorse back in a great spot.

Kamara’s injury report is strange because it seems to be getting worse without much information, but it’s possible that he just took a day off to heal up. If Kamara does happen to sit, Latavius Murray becomes another instant play.

I doubt that all three studs sit out, but if two or all three do, I will likely just LOAD up on these backups in great usage situations and spend money everywhere else.

If we get multiple free squares at the running back position, I will likely turn my attention to the Chiefs vs. Texans game and have stacks full of Patrick Mahomes, Deshaun Watson, Travis Kelce, Tyreek Hill (if healthy), DeAndre Hopkins, Will Fuller, Byron Pringle, Mecole Hardman, and Demarcus Robinson. In this kind of game stack, I will likely want two to three receivers with my QB and one to two running the game back on the other side to maximize my correlation.

If we get a singular cheap RB build this week, I will likely be attacking three different teams, including another game stack. Atlanta vs. Arizona has two teams that want to throw the ball a ton, and a few big plays could really force this game to smash the over. Both QBs have flashed upside at times in different ways, and both teams have a ton of receiving options to choose from.

The Rams are my other favorite stack, and I actually think they could become even more sneaky if Brown is the lead back like I expect.

Everyone is scared to stack a QB and WR with a RB from the same team, but I think a Jared Goff, Brown, Cooper Kupp/Robert Woods/Brandin Cooks stack while bringing back another cheap RB or George Kittle would be a great GPP option on Sunday.