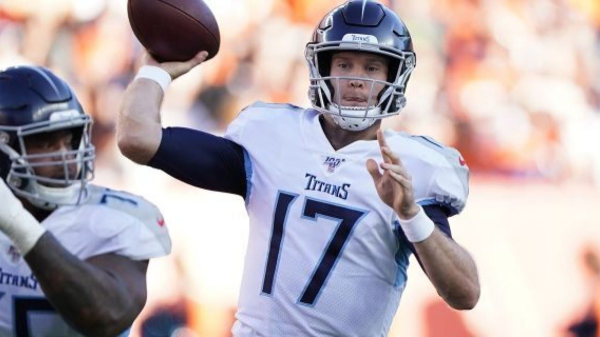 NFL DFS in Week 10 of the season is full of high-end studs and a few interesting cheapies. I really like the chalk this week in most situations, which will mean that I will really need to get different in my pivots to make my lineups unique.

Lamar Jackson is the chalk this week and for good reason. In easy wins, we have seen Lamar rack up relatively good passing stats, and he still provides a rushing floor in any game script. If the game is close, we should see Lamar run even more, and I think that this only increases his ceiling. There are very few paths to failure for Jackson and a lot of ways that he is the highest scorer on the slate at the QB position.

If you want to pay for other positions, I like Drew Brees in a fantastic matchup against Atlanta in a dome. Brees should put up as many stats as he wants in this spot.

If you want a pay-down option, I like Ryan Tannehill at a cheap price tag across the industry. With Patrick Mahomes back, the Titans should be forced into playing catchup early against a weaker defense.

Christian McCaffrey is undeniably the best player in fantasy football right now, and this spot against Green Bay is tough to stay away from. While McCaffrey’s target rate has dropped, I still think that he sees enough targets in a great matchup to continue to produce at a historic rate.

I will be over the field on Ronald Jones after he was listed as the starter and took the majority of the carries last week. The Tampa Bay offense is pretty talented, and I think that we see Jones get multiple goal-line touches on a team that I expect to put up a lot of points.

The best raw receiver play on the slate is Michael Thomas, and it is probably not close from a projections standpoint. Thomas has consistently dominated every single matchup, and now he gets an easy matchup against an Atlanta secondary that has struggled all season. With Brees back, I expect to see Thomas see even more looks moving forward, and I think it increases his upside over the long run.

In tournaments, I love the matchup for Cooper Kupp vs. the Steelers secondary that has consistently been torched by slot receivers. Kupp has proven to be the clear WR1 on the Rams, and this is the best matchup you could ask for.

If you want to pay down at receiver, I really like stacking AJ Brown with Ryan Tannehill against Kansas City. Brown is averaging six targets in his last three games, and I expect this to be a very pass-heavy game for Tennessee.

I really like Travis Kelce this week against a typically stout Tennessee defense. Kelce has not been the fantasy producer that we have assumed he would be coming into the season. This has caused a lot of people to sour on Kelce more than they probably should. I expect Kansas City to feature him down the stretch to get everyone on the same page before the playoffs roll around.

If you are looking to stack up a receiving option with Lamar Jackson for a GPP, I really like Mark Andrews here. Just a few weeks ago, Andrews went for six and 99 against this Bengals team. While this is not a guarantee to happen again, this Bengals defense is gettable, and I think that this is a pass-heavy week for the Ravens against a struggling team.